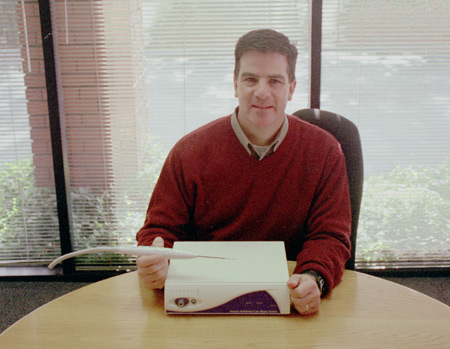 Glenn Foy, president and CEO of Sanarus Medical, with their first product, Centrica.

Sanarus Medical, a medical device company headquartered in Hacienda, has launched the first in a series of products designed to simplify and improve breast care and treatment. Simultaneously, the firm has expanded in the park, moving to an 11,600 square foot office at 5880 West Las Positas, roughly three times larger than their former space on Stoneridge Drive.

A Revolution in Breast Care

The company's new product is part of a line of products which has been designed as an important step in the evolution of the diagnosis, treatment, and follow-up care of breast disease.

Most remarkably, the Sanarus care system makes the process of diagnosing and treating breast problems more comfortable and convenient for both doctor and patient.

"All of the procedures using our products can be done in a doctor's office under a local anaesthetic," explains Glenn Foy, president and CEO. "We think that what is significant about these different technologies is that it's much more comfortable for the patients to go to the office as opposed to the hospital and the operating room."

A New Tool for Biopsy

Their first product, which was released this month, is the Centrica Rotational Core Biopsy system.

"This is a device that a general surgeon can use to take a tissue sample from a tumor in the breast to send to a pathologist, who then provides the definitive diagnosis as to what the suspicious lesion is," says Foy.

Centrica consists of a control box and a hand-held device with a needle-like implement at one end. The needle is inserted through a small, 3 to 4mm incision. The doctor uses ultrasound to monitor the probe's location until it is placed within the tumor, from which he then takes a small sample. The needle is removed and the incision closed with a band-aid - no stitches are required.

The U.S. Food and Drug Administration has already approved the company's second product, Visica, which is due on the market in the first quarter of 2002.

Visica, which will be used in a similar, minimally-invasive fashion, will allow surgeons to destroy benign breast tumors using cryoablation - a process used to kill the tumor using extreme cold - during a 20-minute outpatient procedure.

"We've seen patients who've been treated on their lunch hour and gone back to the office afterwards, so it's very revolutionary in the ability to treat these types of tumors," he says. "The other thing that's important is that patients can actually watch the entire procedure on the monitor. They actually see the tumor or lesion being destroyed, so they feel a part of their care and that's important."

Their final product, Indica, will help in the follow-up phase of breast care by aiding the tracking of the efficacy of previous treatments. It is planned for release later in 2002.