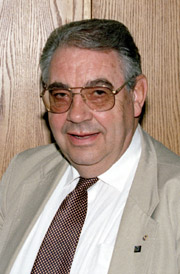 If you examine Pete Snyder's resume, you'll see a total of five lines on his career in the automotive parts industry, in which he has worked since 1952. You'll also find three-and-a-half pages on his community and governmental experience, which is a fair indication of where Snyder has placed his priorities.

"Where I believe any of my experience can be beneficial to a group or an idea, then I'm more than glad to participate," he explains.

Since 1962, when Snyder became a charter member of the Dublin Host Lions Club, he has been one of the bright lights of not just Dublin but of the entire Tri-Valley, working to build the area to its current prominence.

He moved to Dublin with his wife, Priscilla, in 1961, after serving for three years in the Army. Dublin's population was a small, fledgling community, which meant that there was much that needed to be done, so a year later he became a member of a Recreational Study Committee of the Valley Community Services District (which is now the Dublin-San Ramon Services District), which had responsibility for recreation and fire protection in those days.

"There was a group of us that was assigned to a task of finding a location to begin to develop some sort of recreational program in the community, a community center. That's where Shannon Center sits today."

As the community grew, Snyder's interest and involvement grew. He became first a member and then president of Murray School District in the mid-70's, and after leaving those positions in 1979 was drafted by the community to participate in a committee that was studying the possibility of incorporating Dublin as a city. He ended up not only serving in that group but becoming its chair.

"I literally hand-carried all the applications and spoke before the various boards and commissions to get the entitlements for the city to incorporate and wound up as the first mayor," he notes. He served on the city council from 1982 to 1994 and as mayor from 1982 to 1986 and 1990 to 1994.

Despite his leadership in the effort, he highlights the importance of all the participants in the process.

"There were a lot of good people involved in it, people with varied interests, and that's how it should be," he says. "It ought to be a mix of people and ideas so there's something there for everybody, to bring them along."

That philosophy has served as the foundation for all of Snyder's activities in government.

"My nature is not to control but to try to have as many people involved as possible so that reasonable decisions can be made that cut across as many lines as possible," he says. "Consensus is a very important thing. It could be easy to take a hard vote on an issue but sometimes when you do you lose the real flavor for what really needs to be discussed. If you reach consensus, you brought more people into the fold and even those that may not be completely sold on an idea can feel more comfortable in working in an area where they feel they have latitude to work on their own as well."

That idea was also reflected in Snyder's activity and focus in his years as Dublin's mayor and on the council.

"My belief had always been that it wasn't necessarily what was good for the city but we always had to be concerned about our neighbors," he says. "Especially in the Tri-Valley, the five cities needed to clearly have an understanding of what each city's desires and capabilities were so that they could work together."

He remembers a statement made to the Dublin Chamber of Commerce in 1982, the year the city was incorporated, that reflects that idea.

"I said that the success of Dublin would really be measured by what we did in conjunction with our neighbors, and the basis for that was that Dublin's per capita sales tax income was so much higher than Livermore's. We really needed to keep an eye on what we could do to assist Livermore in coming up to a similar level, because it gave them the capability to make improvements like the ones you see there today.

"My goal was to have all of us work together because there was a huge economic capability in this valley, and that's demonstrated today by Hacienda and other developments that have occurred."

His years on the city council were busy ones. In addition to those activities, he served as a chair or board member of a long list of organizations including the Livermore Amador Valley Transit Authority; the Association of Bay Area Governments; the Local Agency Formation Commission; Dougherty Regional Fire Authority; Dublin Housing Authority; Alameda County Waste Management Authority; Alameda County Congestion Management Agency; the Regional Water Quality Control Board; the Alameda County Economic Development Advisory Board; and the Random Access Network, not to mention his work with charitable and community based organizations like the Tri-Valley Community Fund; East Bay Community Foundation; United Way of the Bay Area; Valley Memorial Hospital Foundation; the Lions Club; and the Dublin Fine Arts Foundation and Dublin Sister City Association, both of which he founded.

He tried to retire from public life in 1994, but was once again drafted by the community - this time, for the BART board.

"After I left the city, I really didn't want to do anything else, but some people talked me into running for the BART board. I've been there five years now."

His BART responsibility covers the Tri-Valley and extends into Hayward, Castro Valley, and as far north as Discovery Bay. Currently, he chairs the I-580 Corridor Study Committee, which is looking into how BART can transport people from the base of the Altamont Pass to the East Dublin-Pleasanton BART Station.

"We want to identify some good alternatives to deal with both the highway issue and transit issues on this corridor - how we can improve them, how fast that can occur, possible funding sources; and finally, developing the political means to go after [that solution].

"There are a lot of elements in the study and we hope to have it in November," Snyder says. "That study is probably going to determine a lot of the future of BART in the Tri-Valley." With Snyder involved, it's likely that whatever course of action is taken, it will be the one that best serves the public.