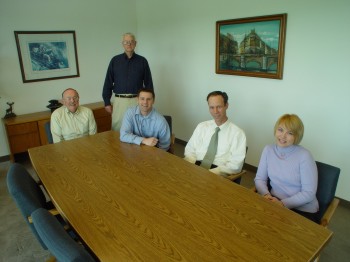 The staff of Hacienda's American Qualified Plans has all the answers about Employee Stock Ownership Plans.

Employees who truly care about the success of the company they work for are more likely to do their best and most inspired work. One way to encourage employees to make their employers success a priority is to give them a financial interest in the company via programs that include stock incentives and profit sharing. In the case of private companies, an Employee Stock Ownership Plan is among the options available for consideration in inspiring long-term employees to help a company excel.

American Qualified Plans, at 5976 W. Las Positas Blvd., provides specialty consulting services in the area of Employee Stock Ownership Plans (ESOPs). The company, founded in 1982, specializes in all ESOP services including plan design, corporate appraisal, annual administration and financing techniques, along with providing profit sharing and 401(k) services. American Qualified Plans is one of the largest ESOP consulting firms in the industry and has helped more than 600 companies offer ESOPs to employees on a nationwide basis.

"In the entire U.S. there are only 11,000 ESOPs, so many people haven't heard of them," says Eric Storjohann, vice president of American Qualified Plans. "There's a lot of wealth tied up in private companies that owners of small to medium sized businesses have built up over the years. Through an employee stock ownership plan, owners can sell a portion of their stock to the employees. The employees don't pay for it out of their own paychecks. With a private company ESOP, the stock is given to employees through a retirement vehicle. Then, when they retire or leave the company, they don't receive stock, they get the cash fair market value of the stock."

According to Storjohann, a large number of private business owners have misconceptions about ESOPs - if they are aware of them at all. "Employees do not vote the stock that's held in an ESOP. It's held in a trust so you're not changing the control of a company," he says. The other concern businesses often have relates to public financial disclosure, which could possibly benefit competitors. "Some owners think that if you put in an ESOP, you have to disclose all of the financial information about the company and it becomes public knowledge, but that's not true at all. For every ESOP plan that we administer, the disclosure is the same as a 401k plan."

American Qualified Plans was located in Hacienda from 1988 to 1998, but moved outside the park for a short time before returning last year. "We were up near Stoneridge for a while, but then we moved back," Storjohann says. "We like it a lot better down here." The company's 3,000 square foot space on W. Las Positas Blvd. is the workplace for its ten Pleasanton employees. A second office is located in Cameron, Montana, near Yellowstone Park.