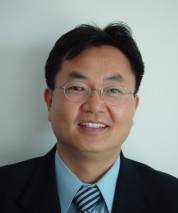 Starting any type of company requires a tremendous amount of time, planning, skill, and maybe even a little luck. Founding an international high-technology company, however, presents a number of additional challenges that many other types of businesses don't have to address.

In addition to anticipating the type of product a given market will adopt before those customers are even aware that such technology exists, in-depth knowledge of the strengths of international participants is also necessary. Individuals with this particular combination of technological and international business skills are somewhat rare, but Northern California seems to attract more of them than most other parts of the world. Notable among the international high-tech minds in Hacienda is Youngdae Kim, president and founder of Darim Vision.

Darim Vision Corp., located at 5976 W. Las Positas Blvd., is committed to developing video compression and transmission technologies. Founded in 1991, the company's focus has been in delivering tools and services that enhance the way people communicate in various market segments.

Since its founding, Darim has continuously developed technologically advanced products based primarily on MPEG encoding and streaming technology. MPEG (an acronym for the Moving Picture Experts Group, the organization responsible for developing it) is the name of a family of standards used for coding audio-visual information such as movies, video, and music in a digital compressed format. The advantage of MPEG compared to other video and audio coding formats is that MPEG files are much smaller for the same quality due to its sophisticated compression techniques. Smaller files can be sent, received, and streamed more quickly over computer networks - including the Internet.

Young-Dae Kim was born, raised, and schooled in Korea, his education culminating in 1985 with a Ph.D in mechanical engineering from the Korea Advanced Institute of Science and Technology (KAIST), a special graduate school for scientists.

Following his scientific education, Kim worked for a Korean military research institute. While working for the institute, Kim was chosen to represent his government in a collaboration with Russia.

"Back when Gorbachev opened the Russian border, the Soviet government instituted new policies," Kim says. "The Korean government began a military business relationship with Russia and I was one of the delegation sent to learn about Russian technology."

Kim's relationship with the Russian scientists as the project manager for Russia-Korea joint development was to prove very valuable a few years later, in founding Darim.

"I had the opportunity to do my post-doctoral studies in the mechanical engineering department at UC Berkeley," Kim says. While continuing his studies, he also taught and lectured students in computer-aided design (CAD), which provided him with an opportunity to hone his English skills and develop a fondness for California.

After six months of lecturing and teaching at UC Berkeley, Kim decided to return to Korea to build a company. He invited his Russian friends to join him in his new venture and established a research institute in Russia. Working with Russian digital video technicians and software engineers, Kim developed his company's first products, with manufacturing taking place in Korea and, beginning in 1996, sales and marketing headquartered in the U.S. Darim Vision was born.

"The Daewoo group initially invested a lot of money and were the owner of my company for some time," Kim says. "Unfortunately their business was not very profitable in 1996, when they decided to stop funding Darim. After that, Samsung became a large investor. Two years later, when Samsung changed their investment strategy, I returned their money to them and eventually became Darim's owner."

After becoming the owner of Darim, Kim received several venture capital investments from companies that include international luminaries such as Hyundai. Kim's company grew to achieve $4.5 million in sales in 2001. In 2003, Kim expects that Darim will reach $10 million in sales.

Darim's product line currently focuses on four markets: MPEG and video streaming, security and surveillance, video broadcast, and video game hardware. The company's products include a TiVo-like hardware device for digital video recording that the company anticipates will replace analog video tape time-lapse systems for security. Other products include MPEG encoder and video capture hardware for the compression and decompression of digital video, and a hybrid chair/video game controller that will allow video and computer gamers to feel vibrations and motion associated with game play. The latter device will be demonstrated at the upcoming Electronic Entertainment Exposition (E3) in conjunction with Microsoft's Combat Flight Simulator game. Yet another interesting product is a "virtual studio system," that allows a digitally drawn stage set to be used instead of a real set for applications such as news broadcasts. Using this product, a variety of different backgrounds and sets can be developed and used interchangeably, without the cost associated with physically building them.

Darim has also won numerous awards for its products, including Broadcast Engineering Magazine's Pick Hit Award at the 2002 National Association of Broadcasters (NAB) conference, several editor's choice awards from U.S. and European video/multimedia magazines, a number of Korean technology awards, and a nomination for Excellence in Technology from the International Security Conference (ISC) West. While Darim's offerings may seem diverse, they all stem from Kim's original idea for a product. "The basic technology of Darim is MPEG compression and streaming," Kim says. "We developed several popular products for MPEG streaming but the revenue in that market wasn't big enough. In expanding to surveillance, for example, we are using a hard disc recording system where we connect a TV camera to a computer hard disc instead of analog tape for recording. The fundamental technology is based on MPEG compression. Even though we are selling to the security market, MPEG is a very important foundation. MPEG compression is also used in our broadcast video products."

Running an international company requires Kim to travel to Russia at least twice a year and to Korea, where he maintains a home and an office, every two months. His true home, however, is now here in Northern California. Kim's main office is in Hacienda and he lives with his wife and children in San Ramon.

Currently, Darim Vision has 60 full time and 50 outsourcing employees in Russia, 70 in Korea, and 10 here in Hacienda. Over the course of a decade, Young-Dae Kim has taken his idea for a video compression product and helped it to grow into a number of different markets, all of which have been successful for the company. Kim has proven that if the basis for a product is solid, it can be adapted to fulfill the needs of a constantly changing marketplace. Whether or not a business involves technology, Young-Dae Kim demonstrates that the ability to evolve is a necessary ingredient for success.