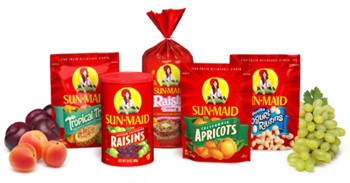 The big news at Sun-Maid Growers of California, the world's largest producer and processor of raisins and other premium quality dried fruits, is the recent redesign of the iconic Sun-Maid raisin girl, whose image on the company's distinctive red packaging is a sight recognized by generations of Americans. While that move made headlines across the country, there have also been changes at the company's Hacienda offices.

Sun-Maid is based in California and has played an important role in the state's agricultural history. Its corporate headquarters are in Kingsburg (near Fresno), and many of its corporate functions have been located in Hacienda since 1982. The company's Pleasanton office recently relocated to 4683 Chabot into a new space specially built out to serve the 50 employees at the company's northern California satellite office.

Company-wide functions handled out of the Pleasanton location include marketing, sales, sales administration, customer service, IT, financial, and logistics. The executive functions are in Kingsburg, which is also the center for operations. In fact, it is the center for nearly all the raisins produced in the United States and approximately half of the raisins produced in the world.

"The company is an agricultural cooperative. We're owned by raisin growers. All of the raisins are farmed within about 50 miles of Fresno, (and they account for) all of the raisins produced in the United States," says Mark Bagley, senior vice president of sales and marketing. The reason is the climate, which is perfect for sun drying raisins. Raisins can also be dehydrated in a hot air oven, a commercial dryer, but using a dryer changes the flavor. The process of sun drying converts more of the starch into sugar and caramelizes the sugars.

"Our raisins are largely produced from Thompson seedless grapes which are naturally sun dried. Sun-dried raisins have a very distinct sweet flavor, which is known by raisin lovers everywhere," says Bagley.

This typical California raisin flavor goes back to 1912, when a group of San Joaquin Valley raisin growers formed the California Associated Raisin Company, a grower-owned cooperative tasked to better manage the uncontrolled growth of the raisin industry and wild fluctuations in price. In 1916 the name Sun-Maid was first used, and a painting of Lorrain Collet Petersen became the basis for the Sun-Maid trademark, which has been in use for 90 years.

The Sun-Maid girl has been updated periodically - 1923, 1956, and 1970 - but the image, while always used as a trademark for packaging, promotional cookbooks, and point of sale displays, has never been part of the advertising. The company was looking for a spokesperson and, not finding exactly what it wanted, decided to bring the Sun-Maid girl to life through computer animation. (If you missed the first ads on TV, you can see them at www.sun-maid.com.)

Sun-Maid produces more than 200 million pounds of raisins and other dried fruits a year. About half are sold as Sun-Maid retail products and half become ingredients in products such as cereals, breads, and other food products.