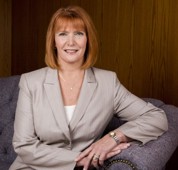 When Janet Frank was tapped to take the helm at the California State Compensation Insurance Fund (State Fund) last fall, she pledged to be a leader worthy of the 8,000 "dedicated employees" engaged in the non-profit's "noble" cause.

While the new president and CEO hit the ground running with fresh initiatives to right the troubled organization, it was not long before she had the chance to demonstrate an aspect of that leadership in a completely unanticipated fashion. About six weeks into the job, the traipsing up and down San Francisco's legendary hills took its toll on her ankle, and surgery loomed. The prospect of four months off her feet in recovery left Frank unfazed. Nor did a subsequent shoulder injury while learning how to navigate on crutches - which required another surgery-slow her down. Already commuting from Denver for the business week, she simply added a wheelchair to her checked baggage and arranged for two electric scooters, one at home and the other at the office, so she could get around.

"Every Monday morning I'd get in the car with my wheelchair and hand it off at the airport," retrieving it on arrival in San Francisco. "I was quite a sight after my shoulder surgery, wearing a hot pink cast and my arm in a sling," she recalls.

There's not a twinge of self-pity in this recitation. Frank's delivery is very matter-of-fact, seasoned with a dash of her characteristic optimism and sense of humor. "My staff was telling me that as head of a workers' comp company, I had to heal very fast so I could be an inspiration to our workers," she chuckles.

Since the mishaps, Frank has done both: heal and inspire. She was back on her own two feet in time to testify in early April at Assembly and Senate hearings on two new bills that would further the progress State Fund had already made "toward becoming a more responsibly transparent, accountable, and effective organization."

A contracting economy and uncertain financial markets make the challenges facing the insurance industry different this year compared to last, she notes. Looking specifically at California workers' compensation insurance, she points out that the savings from reform legislation in 2003 and 2004 have now been realized, and rates have leveled off. The current task is ensuring "an environment of stability and predictability in costs for California employers," she says. Part of that entails anticipating future needs and figuring out how to help, for instance, in case of a potential pandemic. "The CDC says we can expect a pandemic about every 30 to 35 years, and I believe the last one was in the late 1960s. State Fund is studying what we need to do to prepare, putting together a program and training to help foster a safe workplace. We want California to be the safest place to work in, and we have a team of people always looking at how to do that."

In addition to the grace under pressure so amply on display during her first 100 days, Frank has several other tools at her disposal as she tackles the multiple issues on her CEO plate. A veteran of a few successful mergers and restructurings in the insurance industry's private sector, she knows what sound corporate governance looks like and what it takes to orchestrate transformative change. She's also eager to share the lessons she's learned with those facing similar situations. "Significant organizational change requires both flexibility and the ability to develop and optimize relationships across a broad spectrum of constituents," she advises. "It takes very strong communication skills to present and paint a vision, making sure everyone is clear on where they are going and what their roles are."

For her own inspiration she relies on the expansive personal and professional network she has built up over the course of her career. Frank is quick to recognize the contribution these voices provide in terms of "technical, functional, and visionary perspectives" that keep her balanced. The network is constantly growing, with new contacts supplementing the renewed. "I may lose track of folks over the years, but then we reconnect. Just yesterday I got a call from a former colleague I hadn't heard from in at least two years. We spent 30 minutes on the phone, and we both agreed that it was easy to pick up where we left off. It was really fun to catch up and share little vignettes of our lives and what we've learned lately."

Another mainstay is her strong commitment to life-long learning, which, in the late 1990s, prompted her return to school for an Executive MBA, earned at the University of Denver's Daniels School of Business. "The world is constantly changing, and you have to stay up to date on what's happening in business. I was always asking myself whether I had the education level needed to direct a particular group of people." And just to show how persistent the impetus is, "four or five years later I realized I hadn't done anything for a while and it was time to push forward and learn more." This time Frank enrolled in the Advanced Executive Education Program at the University of Pennsylvania's Wharton School of Business, where she was part of a small group of insurance professionals being groomed for higher positions. "Our employers were investing in us, and it was fabulous exposure to the best and most current thinking in business. We worked with world-class academics, plus peers at senior levels in business organizations all over the country. Spending time with them, talking about real issues, is an incredible experience." She pauses for a moment and then observes, "The further up you go in a corporation, the harder it is to find people to talk to about what keeps you up at night. If you have peer network, you can discuss what you're faced with and come up with fresh ideas."

What other personal attributes does it take to lead an organization like State Fund? "I'm very focused and I have a strong analytical ability," she replies. But her high energy level has got to be at the top of the list. During the week Frank rises between three and four a.m. and goes non-stop, breezing through late afternoon meetings and business dinners without missing a beat, until retiring around 10 p.m. "I don't need a lot of sleep during the week. I've always been that way, and I am able to accomplish a lot because of it."

Weekends are a different story, offering the precious opportunity to recharge her batteries. She's still commuting; although her husband occasionally joins her out here, mostly she flies back to Denver. Now empty-nesters, these days the couple prefers a slower pace in their leisure pursuits. A big attraction is their garden and the wildlife it invites, from hummingbirds to an assortment of four-legged creatures. "It's great to sit outside and just relax and read," she enthuses. "I also love to shop - who doesn't? And I love to cook." Hosting spur-of-the-moment dinner parties for the neighbors is a favorite. When Monday morning rolls around, it's back to business. Thanks to a 6 a.m. flight, she's usually at her desk in San Francisco by 8:15, and the five-day whirlwind starts all over again.

Reflecting on how her early life might have influenced her chosen direction, Frank sees a strong link back to the volunteer spirit promoted by the private, all-girls school she attended growing up in Kansas City. She derived great satisfaction from helping, first as a candy-striper at a local hospital and then at a center for underprivileged, early-teen Hispanic girls. "I was charged with helping them identify their strengths, set goals, and develop a plan for what they wanted to do with their lives. There's a connection to what I do today, mentoring people and helping them to develop the skills they'll need in the future, which ties back to my emphasis on life-long learning. That gene for really wanting to help is still very active today."