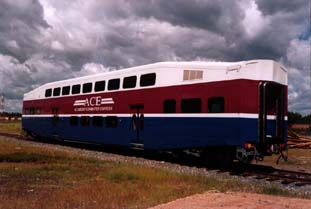 The Altamont Commuter Express will feature two-level passenger cars, similar to those used by the Los Angeles Metrolink.

The Altamont Commuter Express, a much needed alternative for commuters to Hacienda and points beyond from Stockton and Tracy, is scheduled to debut in March, 1998. The commuter rail service will make two round trips daily on the 85-mile trek between Stockton and Silicon Valley.

"The locomotives arrive here at the end of October, with the cars following in November," says Wilma Murray of the San Joaquin Regional Rail Commission.

The new service is widely anticipated by residents and businesses throughout the region.

With the potential to save Stockton-to-San Jose commuters two hours per day in travel time, it's little wonder why. Travel time from Stockton to San Jose on the ACE will total two hours; a trip from Stockton to Pleasanton will take 72 minutes.

"It's cutting down on air pollution and eliminating the need to create more roads," says Murray. "People see it as a big plus all the way around."

The exact schedule for the trains has not yet been set, however. "We're soliciting input from potential riders as to what travel times will work best with their schedules," explains Murray. "We've made several adjustments already." The current draft schedule shows trains leaving Stockton at 4:55 and 5:59 a.m., with Pleasanton arrivals at 6:07 and 7:11, respectively.

The Pleasanton stop will be constructed at the Alameda County Fairgrounds and will be serviced by WHEELS con necting services. The line will begin at the Southern Pacific Depot in downtown Stockton, with the following additional stops: Stockton, Lathrop at Yosemite Avenue; Tracy; Livermore at Vasco Road; downtown Livermore; Fremont at the Centerville Station near I-880; Santa Clara at the Great America station; and San Jose at the Diridon Station.

Fares are also yet to be finalized. However, the current draft fare structure shows a cost of $135 for monthly passes from Stockton to Pleasanton, and ten-trip passes available for $40.

For more information, or to comment on the proposed schedule, contact the San Joaquin County Rail Commission at (800) 411-RAIL (7245).