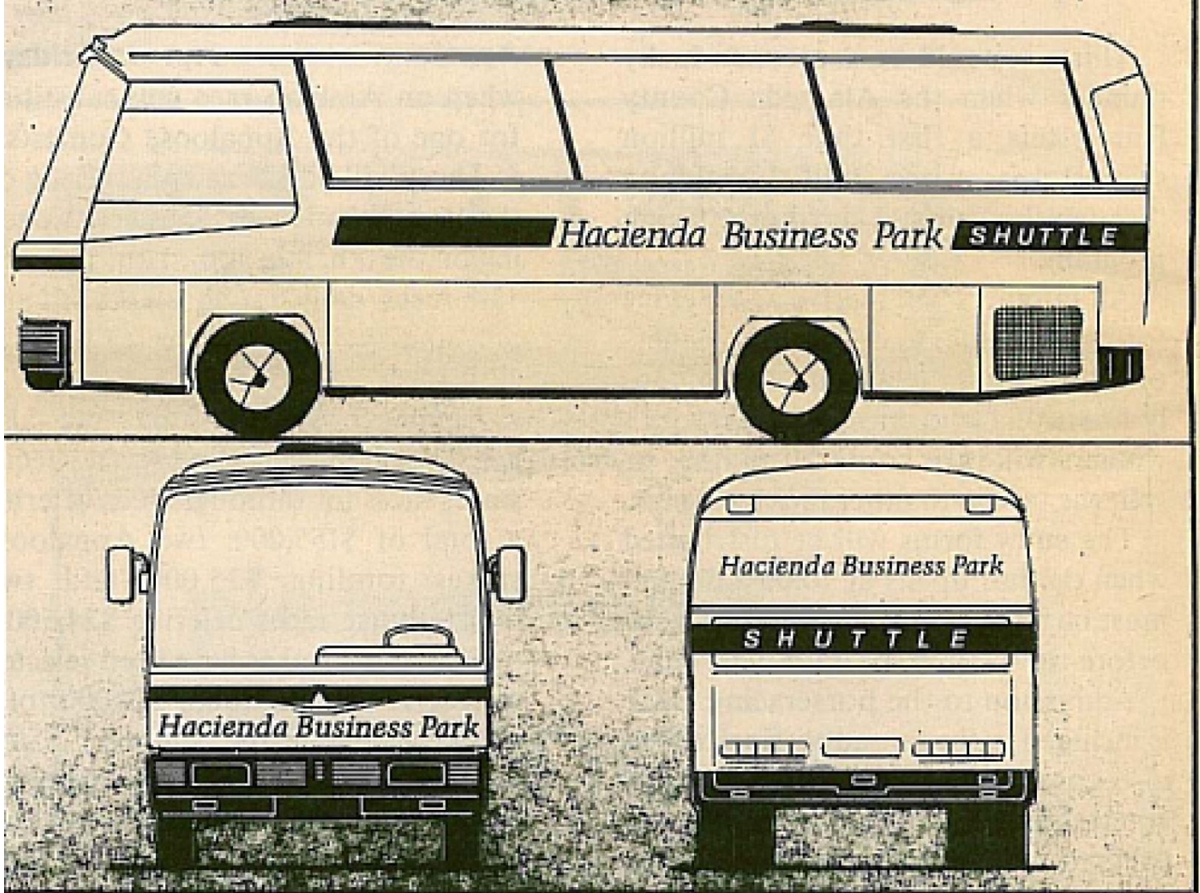 On May 15, Hacienda Business Park will begin what is perhaps the most ambitious corporate-sponsored transportation system in California. That’s the day when Hacienda’s four brand-new, 32-passenger buses begin shuttling employees to and from the Bay Fair BART station in San Leandro during peak commute hours. During the mid-day hours, the buses will be used to shuttle Hacienda employees to Stoneridge Mall (Monday, Wednesdays and Fridays), or to downtown Pleasanton (Tuesdays and Thursdays).

Financed by the Hacienda Business Park Owners’ Association, the shuttles are “expected to substantially reduce the number of employees driving along to work by offering practically door-to-door service between BART and Hacienda,” says Karen Fraser-Middleton, the business park’s transportation manager.

“Additionally,” says Fraser-Middleton, “the lunchtime shuttles will make carpooling to Hacienda that much more attractive, allowing those employees who don’t drive to maintain virtually the same level of convenience as those employees who do drive.” Already, 600 AT&T employees at Hacienda Business Park have formed carpools. Fraser-Middleton expects the popularity of carpools to rise at Hacienda once the shuttles are established.

The end result of Hacienda’s shuttle program will be a significant reduction of employees commuting alone to the business park. A similar reduction is expected in traffic on Pleasanton’s streets during peak commute hours and during mid-day, and there’s a potential for an increase in the number of Hacienda employees shopping, eating and running errands in downtown Pleasanton and at Stoneridge Mall.

The new buses will make four round trips from the Bay Fair BART station to Hacienda Business Park between 6:45am and 8:45am, and five trips between 4:00pm and 6:45pm. The cost of a one-way trip will be ninety cents, the same fare as the existing BART express bus.

To increase the frequency of buses between Hacienda and San Leandro’s Bay Fair BART station, Fraser-Middleton is working with BART officials to coordinate Hacienda’s shuttle with the BART express buses. “By staggering our buses with those of BART, we can reduce the time between available buses to every 15 minutes during peak commute hours,” says Fraser-Middleton. It is expected that BART will finalize its scheduling plans sometime in mid-May.

For employees participating in Hacienda’s ridesharing program, a free mid-day shuttle set of more than 400 vehicles and operating in 17 locations nationwide. The company run bus service will be available to nearby shopping centers. The buses will run every 10 minutes between 11:30 am and 2:00 pm, carrying employees to Stoneridge Mall and downtown Pleasanton, going to one or the other on alternate days.

Another service free to Hacienda employees will be a bus that circulates within the park, transporting workers between buildings. Service within the park will run throughout the day from 7:30 am to 5:30 pm and stop at each pick-up point every 10 minutes.

“Hacienda’s new service will make it more convenient for commuters to use BART, giving them time for reading and using their time more productively,” says Fraser-Middleton. She points out that users of the shuttle system will also save money and reduce stress and aggravation. Holland Industries, the company with which Hacienda has contracted for the shuttle bus service, is one of the largest private bus operators in the country, maintaining a fleet of more than 400 vehicles and operating in 17 locations nationwide. The company runs charter tours, airport shuttles, school bus programs and mass transit systems. As part of its contract with Hacienda, Holland Industries will provide certified bus drivers and a full time, experienced transit manager for the program.

Gail Gilpin, transportation manager for the City of Pleasanton, describes Hacienda’s shuttle program as “ambitious and trend-setting. Hacienda’s Transportation Systems Management program has taken them into a unique public/private cooperative arrangement with BART; once again demonstrating their innovative approach to transportation solutions.”

To see a reproduction of the original article and edition of Pleasanton Pathways, visit:
April 22, 1985 Pathways