The May 10 opening of the BART Dublin/Pleasanton Extension promises to change the lives of thousands of commuters in Hacienda. Along with the BART opening, the Livermore and Amador Valley Transit Authority will be unveiling expanded service on the WHEELS buses and shuttles. With WHEELS services provided at no cost to Hacienda employees, the BART opening offers a commute alternative that's efficient, cost effective, and easy to use. 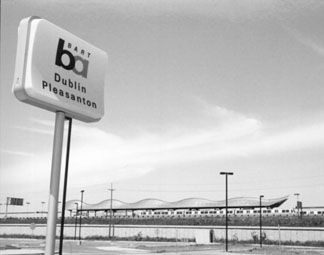 A Tale of Three Commutes

To illustrate how easy it is to use BART and WHEELS, let's take a look at three different commutes from different Bay Area locales to Hacienda.

San Francisco - Commuters from San Francisco should be able to cut a considerable amount of time off their daily commutes. Those who need to be in Hacienda by 8:00 a.m. may board BART at 6:52 at the Powell Street station downtown, which will arrive in Pleasanton at 7:37.

Berkeley - Riders going to and from Berkeley will transfer at any station between Lake Merritt and Bay Fair on the Fremont line or at West Oakland from a Daly City/Colma train.

The most efficient route from Berkeley is the Fremont line. To reach Hacienda by 8:00 a.m., a Berkeley commuter taking a Fremont train would board at 6:47 or 7:02 from the Berkeley Station and transfer at Bay Fair at either 7:22 or 7:37, thereby arriving in Hacienda at 7:37 or 7:52, respectively.

Two other WHEELS options are routes 7 or 8. Route 8 buses leave the BART Station every half hour during peak hours, with departures at :17 and :47 after the hour. After leaving the station, route 8 arrives at Willow and Stoneridge three minutes later and Las Positas and Hopyard four minutes after that.

Route 7 buses also run every half hour, at 29 and 59 minutes after the hour.

Fremont - Fremont commuters can take either a Richmond or Daly City train to the Bay Fair station, where they would transfer to the Dublin/Pleasanton line. Leaving from Fremont at 7:00 or 7:15 on a Richmond train would allow a commuter to transfer at 7:22 or 7:37 at Bay Fair, arriving in Haci enda at 7:37 and 7:52. To make it to, for example, the Crossroads Center at Hopyard and Stoneridge, one could take the 7:59 Route 4 bus, which arrives at 8:06 at the Center.

To use DART, passengers simply call WHEELS at least an hour before their trip and a dispatcher will direct the rider to a pick up point nearby. Shuttles will take the most direct route to the drop off point (usually a bus stop) nearest their destination.

To obtain a free WHEELS pass along with a WHEELS schedule with maps and route information , contact the Hacienda Transportation Hotline at 734-6551 or order it online.