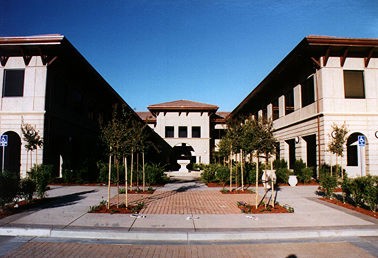 Signature Properties, developers of several residential projects in Hacienda as well as the acclaimed Ruby Hills community, will make a home for themselves in Hacienda with construction of a 48,000 square foot headquarters.

The two-story building, to be located at 4670 Willow Road, will carry on the Italian theme featured in the design of so many of their projects. The building will be "U" shaped, framing a central courtyard that would not look out of place at an Italian country villa.

"I think our company has always shown a great attraction to those aesthetics," says Kelly Wilson, Signature's customer service manager.

The construction schedule is still evolving, according to Wilson. "We hope to get our permits by mid-March, and we would like to be occupying the building by the first of September," she says.

Upon completion, Signature will occupy the first and second floors of the north wing, approximately half of the building. A second tenant is being sought for the remainder of the building.

Those in the company are happy to be staying in Pleasanton. As they have outgrown their current 12,000 square foot location, Hacienda became an obvious choice. The company has developed and marketed four residential projects within the park: Verona, Siena, Valencia, and Avila.

"We have an ongoing relationship with Prudential and the people in Hacienda, and the perfect property for our headquarters is here," explains Wilson. It is little wonder that Signature would end up in Hacienda. The two have formed a formidable team so far: Signature's four developments within the park total over 600 units.

Signature Properties was founded by Jim Ghielmetti in 1983 and has continually grown and expanded since. The company has averaged over 300 new units of housing per year over the last several years.