BART's First Anniversary Sees Hacienda as a Haven for Commuters 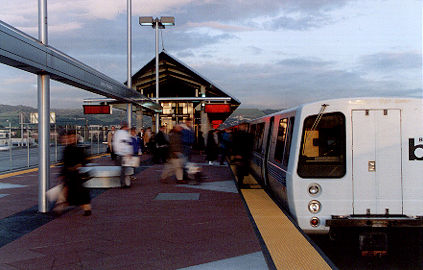 The day begins in a blur for these commuters at the East Dublin/Pleasanton BART station.

May 10, 1998 marks the first anniversary of the opening of the East Dublin/Pleasanton Bay Area Rapid Transit (BART) extension and station.

By all accounts, the year has been a successful one. Ridership has exceeded BART's projections as commuters have discovered the convenience of taking BART to Hacienda and other destinations throughout the Bay Area.

The success of the new extension can also be credited to the broad variety of support services which have been created in the past year. From feeder bus service to the City of Pleasanton's Commendable Commutes program, commuting to and from Hacienda has never been more convenient.

It's going to get even better, though. New transit services including the Altamont Commuter Express (ACE) train and a new I-680 express bus between Concord and the East Dublin/Pleasanton BART station are about to be added (see story below).

"Local reaction has been very positive," says Pete Snyder, who represents the Tri-Valley area on the BART board of directors.

BART ridership has exceeded projections in its first year, as evidenced by the busy parking lots at the station. Snyder is also impressed with the number of commuters who use the BART system to come to Hacienda and Pleasanton.

"I think people may be surprised with the numbers of people who commute from across the hill who get off at the station, which is some 5,500 per day," he says.

Snyder's biggest concern, however, is that the station's full parking lots are keeping potential riders away.

"I'm looking into some ways to create some alternatives so that we can either have more parking or different ways for people to get there to meet the trains," he explains.

Hacienda businesses are invited to attend a special meeting of the Transportation Task Force to discuss the proposed route and schedule of WHEELS buses which will meet the Altamont Commuter Express (ACE) trains. A new express bus service from Concord to Pleasanton on I-680 will also be announced.

Representatives from WHEELS and ACE will be attending to answer questions and to solicit feedback on the proposed services.

Diana Teich of Nelson/Nygaard will also be on hand to answer questions about the Alameda County Congestion Management Agency's Guaranteed Ride Home program, recently made available to all Hacienda tenants as part of the City of Pleasanton's Commendable Commutes program.

The meeting takes place Thursday, April 23 at 8:30 a.m. at the City of Pleasanton's Operation Service Center, 3333 Bush Road. All companies are welcome to this meeting, regardless of past participation.

With additional services in place to support BART commuters and some recent changes in BART policy, using service is more convenient than ever.

For instance, BART has recently changed rules regarding bicycles on the trains. It is no longer required to have a permit for a bike and people with bicycles may now ride any car on the train except the first car. While some limitations are still in place, this should be welcome news to would-be bicyclists celebrating the upcoming Bike-to-Work Week (see story at left).

Perhaps the biggest convenience to those working and living in Hacienda are the free WHEELS passes offered by the Hacienda Owners Association.

"Since BART has opened, we've seen a greater than four-fold increase in the ridership on the WHEELS buses," says James Paxson, Association general manager.

Anyone working or living in the park is entitled to a pass, which may be ordered from the Association through the Transportation Hotline at (925) 734-6551 or via the World Wide Web at

Paxson notes that the BART station's location within Hacienda has further enhanced the park's appeal to potential tenants.

"There's no question that the station's location is an important consideration for companies seeking to relocate," he says.

He also credits the BART station for adding to the success of transit-oriented development within the park.

Hacienda commuters will be invited to push some pedals as RIDES for Bay Area Commuters sponsors Bike-to-Work Week May 18 through 22.

Participants who register with RIDES and bicycle to work or school at least once during the week are entered into a drawing for some great prizes, including two round-trip tickets on Southwest Airlines.

Special events are scheduled for May 19, which has been designated Bike-to-Work Day. An "Energizer Station," sponsored by BART, the City of Pleasanton, and the Hacienda Owners Association, will be set up at the East Dublin/Pleasanton BART station. Drinks and prizes will be presented to bicycle commuters, including t-shirts to the first 25 riders.

Another great enhancement to the Hacienda commuter landscape is the City of Pleasanton's Commendable Commutes program and its newly revised Guaranteed Ride Home program. Hacienda has recently been designated a major work site by the City, and as such all Hacienda employers are entitled to enroll in the Alameda County Congestion Management Authority (CMA) Guaranteed Ride Home program.

The program encourages employees to use a commute alternative by assuring them that they will not be stranded in an emergency. If an employee has taken the bus, train, BART, carpooled or vanpooled, or even walked or bicycled to work and must leave early or stay late unexpectedly, they will receive a free taxi ride home.

The Guaranteed Ride Home is free to the employer and employee. However, both must be registered with the CMA.

The City of Pleasanton's Commendable Commutes program offers additional amenities to companies with 75 or more employees. Call Diana Bonanno at (925) 484-8289 for additional information.

BART has also recently entered into negotiations for construction of the proposed West Dublin/Pleasanton station with LaSalle Partners, a Chicago-based developer with extensive experience in transit centers.

LaSalle has expressed interest in leasing the site from BART for the purpose of developing a commercial center, which could include two hotels and a conference center.

In return, LaSalle would develop the BART station and adjacent parking areas, with 1,400 spaces for BART use. LaSalle's initial proposal indicates that no public money would be needed to construct the new BART station, which could be completed in approximately three years.