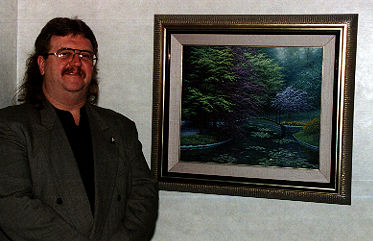 Jeff Tichenor stands with a piece by Charles White. The work will be Classic Editions Publishing's next release.

Tichenor Focuses on Delivering Quality at a Reasonable Price

Jeff Tichenor, president of Classic Editions Publishing, understands the old fable of the tortoise and the hare.

He started Classic Editions, which markets limited edition reproductions of works by artists Charles White and Pleasanton resident Deborah Wardrope, in 1993, when the limited edition market was "over its peak."

"The publishers who were big in the marketplace had a philosophy of issuing very large editions, flooding the market with every image," he says.

Their hare-like desire to capitalize quickly resulted in the release of "limited" editions with as many as 80,000 pieces. "That's not very limited," Tichenor adds. The glut in the market also meant that an individual artist would not retain popularity for more than five to seven years.

"I had a firm belief that there was a way to create a collectible market for a longer range by producing smaller editions and fewer pieces per year," he says. In contrast to the 80,000 pieces offered by the biggest publishers, Classic Editions produces just 1,000 pieces per edition - 750 signed and numbered lithographs and 250 canvas reproductions.

The plan has worked. "In our first few years, we had dealers beating the door down because we were what was missing from the marketplace," he says. Due to Tichenor's visibility - he writes a monthly column for the industry's largest trade journal, serves as a director of the Art & Framing Council, and lectures across the country on industry-related issues - other companies began following suit. "We set a trend in the marketplace, with edition sizes coming down," he says.

They try to keep prices down, as well. "So many artists and publishers were allowing the prices to just go through the roof," he says. "We wanted to keep it so that the people who enjoy the artwork could afford it."

It's a nice sentiment, but it's also good business. "We have been one of the fastest growing publishers in the limited edition marketplace," he says.

It helps that the company represents artists as talented as White and Wardrope. White, who is also one of the company's founders, is well known for his remarkably realistic landscapes, painted in oil on canvas. Local artist Wardrope's beautiful, detailed pastels have also won praise far and wide.

Don't expect Tichenor to turn into a hare anytime soon, though. "The founders of the company all have a very strong belief in our plan," he says. "My vision for the company is five to six artists total, and that's all we will ever do."