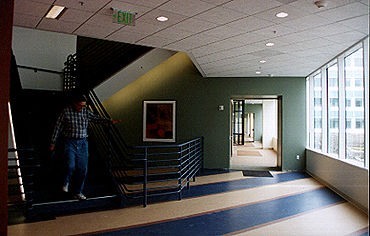 The colorful interior of the new PeopleSoft campus reflects the personality of the company and its employees.

The first 250 employees have moved into the new PeopleSoft campus on Hacienda Drive near the East Dublin/Pleasanton BART station.

In all, the 380,000 square foot facility will be occupied by 1,350 PeopleSoft employees. The campus will hold the company's executive management team, developers, and its Visitor Center, along with amenities like a cafeteria and fitness center.

The new facility is being met with enthusiasm, according to Deborah Oxendine, PeopleSoft's director of real estate and administrative services.

The facility also has a high ratio of conference rooms to offices, allowing for better teaming facilities.

Perhaps the centerpiece of the new facility is the PeopleSoft Visitor Center, where prospective PeopleSoft clients can come to see the company's software at work on a variety of platforms.

"The Visitor Center has nine different conference rooms in various sizes, plus we've got some of the flashy, splashy audio-visual setups and teleconferencing," says Oxendine.

The cafeteria will also have its fans. Marriott Foods has been selected to provide daily meals and catering services from a new, state-of-the-art kitchen.

Oxendine reports that the building will be occupied over the next four months. Because PeopleSoft is growing so quickly, the company will not be giving up any leased office space as it occupies the campus.

PeopleSoft is actively pursuing additional expansion opportunities in both Pleasanton and Dublin.