Already under high demand, ticket application forms are expected to be ready late this month as the Altamont Commuter Express (ACE) Train nears the September date it is expected to begin service. 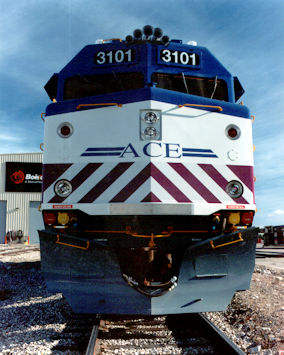 Progress on the system is coming at a fast and furious pace. July 8 sees ground breaking on the Livermore Transit Center platform, with the Pleasanton platform beginning construction on July 22.

Union Pacific is also busily upgrading 82 miles of track to accommodate ACE's high speed trains, which will operate at 79 miles per hour.

"UP is moving forward very aggressively with their track program," says Jack Rich, rail operations manager for the San Joaquin Regional Rail Commission. "If you travel the Altamont Pass, you can see them out there working, throwing away wooden ties and putting in new concrete and steel ties."

"They've faced the same kind of weather-related delays that we have, only it's been compounded for them," adds Wilma Murray, passenger services coordinator. "If there's a washout on a main line that's carrying a lot of freight, they need to take care of that before they can handle track improvements for us."

The Rail Commission is also close to a lease agreement which would enable them to add one car to each train, allowing 140 more commuters to get off the freeways.

Get Your Passes Early

Potential riders interested in commuting on the ACE Train are recommended to submit applications as quickly as possible once the formal ticketing plan is approved in late July,