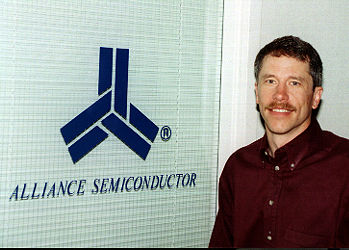 Seeking to tap into the local workforce, Alliance Semiconductor has opened a Design Center on Gibraltar Drive in Hacienda. The facility will focus on creating a line of new products for use in networking and telecommunications.

"These Design Centers can be a way to expand the labor pool," says Kris Holt, product line manager. "When people find out that we have an IC (integrated circuit) design house here in Pleasanton, they're very excited. We're getting the word out, that you don't have to endure the commute to do this kind of work."

Alliance Semiconductor is a leading worldwide supplier of high performance memory and memory-intensive logic products, including SRAM, DRAM, flash memory, and graphics controllers. The company was founded in 1985 and is headquartered in San Jose.

The Pleasanton Design Center will focus on a new product line for the company.

"We want to enter the networking and telecommunications market," says Holt. "Alliance recognizes this area as a tremendous growth market, and we have an advantage because memory is very important in high speed networking communications."

The Start of a Trend

"There's an untapped segment of the labor market where there are people out there who like where they live and like doing this type of work, but hate the commute to Silicon Valley, and we offer an alternative to that," he says.

While other alternatives exist, such as telecommuting, he believes that these options are not very effective for the semiconductor industry.

"There's just way too much interaction between engineers to have them working remotely," he says. "With these remote Design Centers, people can have the quality of life without having to commute and you can have the small team interaction, which is very important."

"The cost of starting a facility like this is insignificant relative to the cost of not being able to hire people," he says.

Holt says that the company plans to hire almost 30 engineers for the facility over the next two years, with half of them coming by the end of this year.