Shaklee to Break Ground on Campus May 28 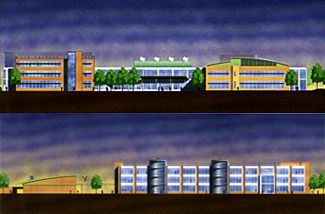 These archictectural renderings of the Shaklee campus show the unique configuration of the new facilities.

$75 Million Facility is to Serve as Company's Worldwide Headquarters

Shaklee Corporation will break ground May 28 on the first phase of a 625,000 square foot campus that will serve as the company's world headquarters. The 28-acre site will allow for consolidation of Shaklee's various San Francisco and Hayward divisions.

In all, a total of 625,000 square feet is scheduled for construction on the property, consisting of buildings of one, two, and three stories.

Kay Childs, vice president of human resources, reports that the development will proceed in three phases, to coincide with the company's future needs.

"The phasing of construction for the Hacienda campus makes economic sense and allows for future growth," she says. "The capacity exists for eventually tripling the number of headquartered employees."

Construction is to begin in June, with the first office building scheduled to be completed in 18 months. An estimated 275 employees are expected to occupy the building, with an additional 150 to 175 employees in the research and development facility.

Of the 28 acres that comprise the Shaklee campus, nearly ten of them are dedicated to open space.

The landscaping will feature two different themes, one local and one global.

Much of the area will recreate an ecosystem native to the Tri-Valley, with informal meadows, forested areas and landscaped courtyards. One area will feature native oaks with annual grasses, with the intention of giving it a soft, informal feeling.

Special demonstration gardens are also planned, featuring both ornamental and medicinal plants. The latter will provide a "living library" of plants and herbs from around the world which Shaklee uses to create its health care products.

The project's designers, Gensler Architects, have created plans that reinforce Shaklee's environmental awareness. Buildings will maximize natural lighting and employ a variety of energy conservation measures. For instance, the design and even construction materials differ between the north, east, south, and west sides of each building, depending upon its exposure to the sun.

According to Gensler, the campus "is designed to resonate with the mission of Shaklee Corporation: stewardship of nature, better living through the use of natural products, support of personal health and physical exercise, and success based on work of individuals supported by the community."

Shaklee kicks off the construction of its new campus with a groundbreaking ceremony on May 28 at 10:00 a.m.

A Return to the East Bay

The move to Pleasanton represents a sort of homecoming for the company. Shaklee was founded in Oakland in 1956 by Dr. Forrest C. Shaklee, Sr., and his sons Forrest, Jr., and Raleigh. The company headquarters remained in the East Bay until 1980, when they were relocated to San Francisco.

Shaklee is a diversified consumer products company with multilevel marketing, research, and development technology under the Shaklee name and direct mail products sold through Bear Creek Corporation. Bear Creek includes Harry and David, a purveyor of gourmet fruits and foods, and Jackson & Perkins, the world's largest grower of roses.