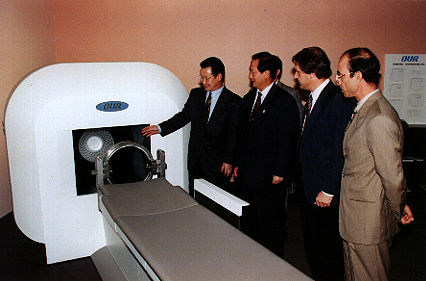 A group of dignitaries including Li Dicheng, the vice mayor of Shenzhen, China, visited OUR Medical in October.

It almost sounds like a riddle: How can doctors remove a brain tumor without making an incision?

The answer is well known to the scientists at OUR Medical, though. Using a machine that they manufacture, what seems impossible can be achieved: bloodless brain surgery in which the skull is never opened.

The technique is known as radiosurgery, and has been used on over 150,000 people since 1968. Doctors uses radiation to injure or kill tumor cells or their supporting blood vessels while minimizing the effect on healthy tissue.

OUR's Rotating Gamma System (RGS) is part of the latest generation of radiosurgery devices. Invented in 1992 by a scientist in Shenzhen, China, it uses gamma rays from radioactive cobalt which are focused in dozens of needle-thin beams. While each beam is not strong enough individually to harm the cells, "where they converge, it has power," according to Franz Krispel, Ph.D., president and CEO of OUR.

The innovation in OUR's device is in its ability to rotate the radioactive beams, says Dr. Krispel.

"The rotating radioactive sources form a tapered plane of gamma rays at the target center," he explains. "Due to this rotation, the gamma rays pass through normal tissue by different routes and directions, so the exposure to normal tissue is much more dispersed."

The RGS, which costs over $30 million, is currently being used in hospitals in the U.S. and China, as well as other countries.

The company recently received a delegation from Shenzhen, where the device was invented and where parts of it are manufactured.

Among the group was Li Decheng, executive vice mayor of the city of 1.9 million people, located 60 minutes northeast of Hong Kong. OUR has close ties to the city.

"The idea behind the company was to use the patent that was generated in China and set up a company with R&D worldwide to produce this device," explains Krispel. "The funding for the company comes mainly from China and Hong Kong."

In addition to its facilities in Pleasanton and Shenzhen, the company also maintains its main sales office in New York.