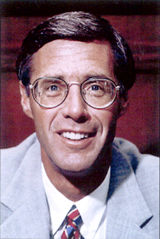 One of the trends in the newspaper business over the last 20 years has been corporate buyouts of family-run papers.

"I can remember, when I started in 1975 at the Green Bay Press Gazette, that 750, 800 newspapersalmost 50 percent of themwere still owned by families," says Scott McKibben, president and publisher of ANG Newspapers, whose Tri-Valley Herald is headquartered here. "Today, the list is down to about 300."

While families may not own as many newspapers as they once did, McKibben is proof that it's still a family business. "My father was a newspaper executive for many years, and my brother is the publisher of our (owner's) flagship paper, the Denver Post," he says.

All Over the Country

Born and raised in Minneapolis, McKibben graduated from the University of Wisconsin in 1975 and worked for a series of papers there, eventually working for the Gannett Corporation after they bought the Green Bay paper.

He spent seven years with Gannett in a variety of positions, and later served as the advertising director for the Philadelphia Inquirer, vice president and general manager of the Dallas Times-Herald, and publisher of a Stouffer Communications daily paper in Topeka, Kansas. He took his position with ANG just over 18 months ago, and is pleased at being here.

"There are very few spots that afford you both the personal and professional rewards and satisfaction that you get from living in Northern California," he says. "To be in a top ten (media) market that is a nice place to live, that's a good combination."

While the trend may be towards corporate ownership of newspapers, ANG's acquisitions don't fit the typical expansion plans of most corporations, where smaller companies are simply swallowed up by larger ones.

"We call it clustering: You pick out certain geographical pockets and try to buy as much mass in those particular markets as you can," he says.

For instance, three weeks ago ANG purchased the Pacifica Tribune, a small newspaper with a paid circulation near 9,000, ANG already owns the San Mateo County Times and six weekly papers produced in the county, but lacked a presence on the coast.

What will change is that the Pacifica newspaper will now be printed on ANG's presses in San Mateo, and the San Mateo administrative and billing personnel will service the new paper as well.

Of course, the biggest advantage comes in attracting advertising.

"You really start to grab the attention of the larger advertisersregional retailers and national advertiserswhen you bring a circulation of almost a quarter million," says McKibben.

That kind of business just isn't attracted in a paper like the Pacifica Tribune, or even in the Tri-Valley Herald, with its circulation of 45,000.

"The demographics are very good out hereit's a market that they might want to buy, but it's considered secondary if not tertiary," he says. "We move our advertising clout up considerably because of clustering."

Besides overseeing and coordinating the activities that go on in all of ANG's newspapers, McKibben spends a lot of time on developing the people and culture of the organization.

It's important that employees know so that they can see the direction the company is taking as well as the goal of that action. The key, says McKibben, is communication.

"We try hard to push decision making down to the lowest level," he says. "We want the person who will ultimately be accountable to have the authority to make that decision."

While each decision may not be approved and acted on by the company, he recognizes value in the interaction.

"At the end of the day, I think that the most important thing is that the process has taken place," he says. "They've had a chance to give input, to study the issue and make their presentation to us. The employee gets a level of involvement and exposure that they may not have had if it had been a top-down kind of organization."

The trick, McKibben finds, is acting on this philosophy. "There are lots of companies that say they do this, but one or two people are still making all the decisions," he says. "I'm not saying we absolutely succeed, but we try hard to spread things out around here."