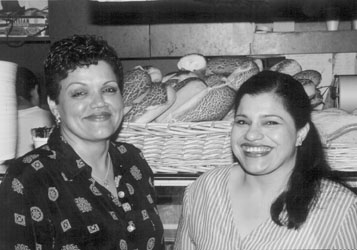 In more ways than one, it's a long way from Bombay to Pleasanton. Whether measured culturally or geographically, it would be hard to find two more different places.

It makes the story of sisters Jeanette Price and Annabelle Rodrigues even more remarkable. Despite the many differences and the adjustments that they necessitated, the two owners of Amelia's Deli Bistro have built both a business and a life for themselves here, combining elements of India and America in both.

Jeanette and Annabelle are two of the four children of a Bombay doctor.

"My parents have lived in one area of Bombay for the last forty years, and everybody knows everybody there," says Annabelle. "Because my father was a doctor for all the kids he'd seen them grow up, marry, and then their kids would come to him everybody knows you. You go down to the store and people knew you, everywhere. You come here, nobody knows you. You take that for granted when you're over there."

Despite the challenges inherent in relocating, both Jeanette and Annabelle and both their siblings moved to the U.S. for family and career. Jeanette was the first to make the move.

"I came in 1984 after I got married," says Jeanette. "My husband came (to India) on a vacation, and we met and got married. If I hadn't gotten married, I wouldn't have come here."

Their two brothers, both doctors, followed and so did Annabelle.

"My coming here was to be with the rest of the family," she explains. "Also, when you're Catholic in India, it's not the best combination. You're a minority and there are not that many opportunities for you. We are treated as second class citizens, basically."

The two both have backgrounds in teaching. Jeanette holds both B.A. and B.Ed. degrees and taught English and history at the high school level. Annabelle holds two degrees as well, in psychology and in hotel management, and taught at a private college in India before making her move to the States.

Their teaching backgrounds are turning out to be quite useful in their new endeavor.

"Teaching has made me more articulate and you tend to have a little more patience with people," says Annabelle. "It has helped tremendously."

"Eighty percent of our staff is Hispanic, and I really try my hardest to teach them English," she says. "Most of the people we have average four to five years with us, and we try to let them know that if they take English classes that it will give them more opportunities with us here. Everybody is growing with the business."

Despite any cultural differences, Jeanette's founding of Amelia's will be familiar to entrepreneurs everywhere.

"I loved to cook, and I had entertained a lot when I was back home in India," notes Jeanette. "I can handle a party by myself for about 75 or 100 people, doing everything from entrees to desserts, and I thought I would really enjoy the food business."

She investigated several franchise opportunities but quickly rejected the idea.

"I realized we wouldn't be able to create our own place; we wanted to have our own thing and blend the tastes of East and West," she says.

She has succeeded in creating her vision with Amelia's. The menu features both typical and exotic deli fare as ham sandwiches sit side-by-side on the menu with Tandoori chicken sandwiches and unusual vegetarian plates, all with a homemade touch.

"We make our own salads and breads and desserts and all of that stuff," she says. But even their more unusual condiments are being added to traditional deli items.

"Our chutney is becoming famous now," she adds. "People don't like to eat mayonnaise and all that."

Feeding all that good food to people is making them friends all over.

"People ask us to ship cookies, they'll have a client from Florida that tasted the cookies and wants them shipped, and those are the things that make it worthwhile for me," says Jeanette.

Annabelle agrees. "It's nice whenever you go to a restaurant in Pleasanton, there's always somebody who knows us. I've actually been to New York at Rockefeller Center and met a customer."

Perhaps America is more like Bombay than one would guess.