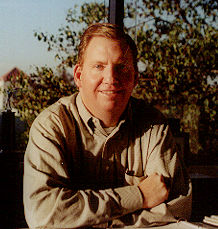 He's not sure exactly why, but Steve Smiley has had a lifelong fascination with real estate.

"When I was in high school," he says, "for a couple of summers I was a runner for a Coldwell Banker commercial broker. Then I hooked up with another job right out of high school that I held when I was in college, with a law firm that had a lot of real estate clients."

A Pasadena native, he studied real estate finance at San Diego State, then entered the field after graduation with a land developer who worked around San Diego and Las Vegas.

"I think what interested me was more just what makes a property good - why would somebody buy it and who's going to buy it," he explains.

His 12 years with the Meyers Group has given him a perfect opportunity to learn just that - what makes a property valuable and why.

The Meyers Group's main product is a remarkably complete database that covers all residential developments of 10 or more units.

"We look at pricing, unit sizes, absorption it's a pretty interesting database," he says.

It doesn't end there. The group surveys details down to the brand of appliances used in the new developments.

"We can show GE or Whirlpool their market shares in any of the markets we track," he says. "Roofing companies subscribe to our database; so do heating and air conditioning contractors," he says. "There are about a hundred different variables that we track."

It also provides Smiley with a unique perspective on the market in any given area.

"I always try to learn a market from the very micro - you know, what is selling down the street - and that's because of the database, which is what I did for my first year with The Meyers Group," he explains. "I was in all these housing projects, learning the markets, learning to see things from a builder's perspective."

Smiley's knowledge and experience has given him the ability to read a real estate market like a stockbroker might read the Dow Jones averages.

"Once you know how to figure out a market, it's all part of the same basic equation," he says. "They say 'location, location, location,' but there are other things. I think what drives my interest is more what to build than where to build - what drives the market, what's going to be better suited at this corner, housing or a retail commercial development."

It's a different type of knowledge than Smiley sees from new college graduates, many of whom he feels have an inflated idea of their value in the market.

"They don't have any experience," he notes. "They may have a master's degree but that doesn't necessarily equate to knowing what to do. It's a question of, 'Are you book smart or are you work smart?' I'd rather take work smart most of the time."

Thoughts on the Bay Area

With the rapid growth of the Bay Area housing market, Smiley notes that his firm is called upon more than ever to evaluate proposed projects.

"The major struggle I think the builders have, especially in the Bay Area market, is that they're paying so much for the land," he explains. "Can they afford to buy land and still sell a house, and sell it fast enough to make money doing it.

"It's been a struggle for a lot of these guys to make things pencil out, so they'll ask us what kinds of products they should be offering. Our housing data helps us in trying to determine how fast an area like Tracy will grow over the next 20 years."

Variety in a Day

The Meyers Group's depth of knowledge of any given housing market means that they are also often called upon to consult with builders and investors regarding potential projects. It adds a degree of variety to his job which Smiley also enjoys greatly.

"The best part about my job is that I don't do the same thing every week, which I love," he says. "As a real estate finance major, one of the drawbacks was thinking, 'Oh, I really don't want to be a banker - I have no intention of being in a suit all day long and crunching numbers.' This job gives me a little bit of everything."

Numbers remain an important part of his job, but so is being in the field, working with developers. He's opened two new offices for the firm so far and is spearheading their current expansion to Portland.

Through it all, he's amassing knowledge of not only the real estate industry, but also of the entrepreneurial side of business.

"It's kind of a learning experience - you've got to be pretty well-rounded," he says. "I'd like to think I know about a lot of things, but I don't know if I know in depth all of the things I can. That comes with time."