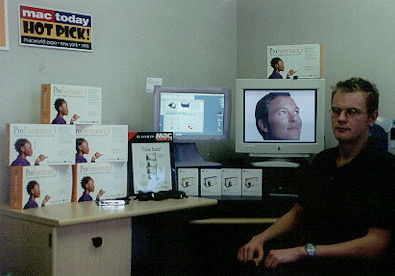 Formac webmaster Florian Hackinger shows off part of the Formac product line at their Hacienda offices.

One of Hacienda's newest companies, Formac Electronic, is already well known in its native Germany. With the recent resurgence of both Apple and the Macintosh, the timing of their expansion to the U.S. has proven excellent. The company's products are winning rave reviews in industry publications and proving to be a hit with Mac users on this side of the Atlantic as well.

"The press is mentioning our products in a good way, our contact with Apple is much better (than in Germany), and our sales are increasing," says Oliver Bergmann, Ph.D., president and CEO of the company's U.S. subsidiary.

Their latest product, a set of glasses with LCD shutters in each lens, will be used by two groups of users which would appear to be quite different from each other: video gamers and scientists.

When used in conjunction with their high speed ProFormance 3 video card, the glasses allow 3-D images to be seen in three dimensions, giving depth to the many 3-D games now on the market as well as to more purposeful applications.

"I think more important for us is the medical market, where you will find applications put to use to look at molecular structures, for example," says Dr. Bergmann. "

Formac was founded in Berlin in 1987, marketing a line of disk drives for the Mac Plus. The company soon expanded into graphics cards, CPU accelerators and even monitors.

The U.S. division, headquartered in Hacienda, was incorporated in March of this year and opened its doors July 1.

"Pleasanton was for us a very good choice, because we have contacts with many companies here and can really start new product ideas ," he says. "Everything is much faster here."