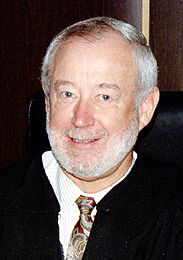 Judge Ron Hyde's life is all about community service. Whether it's in his official capacity as a judge for the Alameda County Superior Court or simply as an involved citizen, there's not much that he does that isn't motivated by a desire to serve the community.

"I enjoy it," he explains. "The thing is, I undertake community projects and tell people 'yes' for two reasons: one, I can, and two, I enjoy it."

It was an unusual chain of events that brought Hyde to his legal career. "I started out to be an orthodontist," he notes.

After finishing his biochemistry degree at St. Mary's College, he was accepted at Marquette University's dental school only to find out that tuition was $25,000 per year.

"Which I didn't have," he says. "In fact, since I had worked my way through St. Mary's, I still owed them money."

Faced with a choice of going further into debt to fulfill what in many ways was his family's goal for him, he devoted some serious thought to his situation and came up with a key question.

"I saw, do I really want to spend the rest of my life putting my fingers into people's mouths?" he smiles. "No disrespect to the dentists out there, but I decided it was not for me."

Instead, he planned to pursue master's degrees in creative writing and marine biology, his two favorite subjects. In the meantime, though, he took a job at the State Compensation Insurance Fund to help pay off his undergraduate education.

"Part of my training at the State Fund was reading worker's compensation cases, which everyone told me was dull and boring.

"I was fascinated with it, the logical application of the law as applied to facts. I have one of those minds that is able to take something complex and reduce it down to a simple issue and I find the answer. The way that they made rulings and how decisions were wrought in these cases was fascinating to me - and these were dull worker's comp cases. But I was attracted to just the whole way it worked."

Enthused, he walked to Golden Gate University, met with the dean, and "talked my way into law school. I never took the LSAT."

After completing his schooling and passing the bar exam, he rented a home in Dublin, based exclusively on the fact that the city was nearly equidistant from the county courthouses in Oakland, Martinez, and Santa Clara, and started his own practice from the back bedroom.

He rented an office after about a year and became active in Dublin life as a charter member of the Dublin Rotary Club. He soon jumped in with both feet.

After several years specializing in family law, he learned in 1982 that his name was being considered for the bench, to finish the two years left on former judge Mark Eaton's term.

"In November of 1982 I got the phone call from Governor Brown. I finished Mark Eaton's term and got reelected to a six year term of my own."

Moving from a family law practice to being a judge on criminal cases was a big change, but one that he was comfortable with. After all, he had already changed directions from biochemistry to law.

"People often ask me about my change in direction, don't I think that was wasted. And I say not at all- you learn something that can't be taken away from you, number one, but it's also a discipline you adopt and that prepares you.

Of course, becoming a judge put him at the center of many contentious courtroom arguments, which added a new element to the situation.

"Are (attorneys) going to try to pick your pockets as a new judge? You bet your life. But that made it kind of fun, actually. It became mental chess - I made mistakes and learned along the way, but once I knew the law I was able to challenge these guys on what the ruling would be.

His primary satisfaction as a judge now is in helping people, even if they don't always see it that way.

"It's that aspect of the job, working with people and getting them to find their own resources to be able to be the person they want to be. People have it within them - sometimes they just need a little boost. And I'm the boost. That's probably the best part of it to me."

He provides other boosts to the community as well. Through his "Kids in Court" program, over 25,000 children have viewed the proceedings of the court following a presentation by the judge explaining what they are about to see. He has worked with the Amador High School civics team and Foothill High School's mock trial.

Most of his community involvement now comes through two organizations: the North Pleasanton Rotary Club and the Pleasanton Partnerships in Education Foundation (PPIE).

"As I've progressed in life and gotten more involved in things and come to appreciate the joy of doing for others, I've acquired my favorite saying, which is 'What you get is how you make a living and what you give is how you make a life.' I firmly believe that," he says.

"I just enjoy being part of the Rotary projects that we do, whether it's for the senior citizens or Shepherd's Gate or Tri-Valley Haven or working for PPIE or one of the eight committees I'm on for the Superior Court."

Despite the fact that there are obvious differences between life in court and the life of the community, Hyde sees many more similarities between the two worlds.

"There's really a combination of what I do in the community with what I do here. Both of them give me a great deal of satisfaction. It's a full life."