Ernie Hughes: From All-American to CarrAmerica 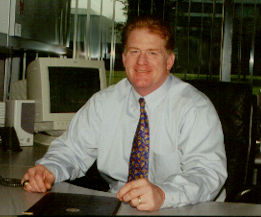 If you ever get a chance to talk to Ernie Hughes for very long, there's a good chance you'll hear the word "character" once or twice.

Hughes vice president and director of operations for CarrAmerica Realty Corporation knows all about building character.

It started in Boise, Idaho, where he was born and raised. His talent as a high school football player led legendary college coach Ara Parseghian to recruit him to the University of Notre Dame, where he matriculated in 1974. It turned out to be one of the best decisions Hughes ever made.

"The number one reason I went to Notre Dame was to get an education," Hughes explains. "Ara Parseghian, who was a great mentor of mine, game me the sense that education was number one and football was number two, even though that was one of the greatest institutions in the land for generating a football program."

Hughes quickly learned that the emphasis on academics wasn't just window dressing to please the parents of potential recruits.

"We had academic advisors that monitored our daily performance in our classrooms. If we missed a class or were even late for a class, we were reprimanded," he says. "We were taken out of practice and if it continued, he would hold us out of a game. There was no slack for someone who didn't attend class."

It was a far cry from some of today's schools, where athletics has taken priority over education in many instances.

"More and more of these athletes are thinking that education is second they just want to play in the NFL and all that," Hughes says. "The sad story is that the likelihood that you'll achieve stardom in the NFL or even that you'll get an opportunity to compete at that level is a real long shot."

His experience at Notre Dame served to illustrate the importance of much more than just excelling at football: He learned the value of leadership and teamwork.

"I look at the value of an athletic and academic program where the professors, coaches, and senior administration of the university build on the education value of the school and build great people with leadership skills. If they can develop those skills through football, so be it."

Football was the right avenue for Hughes. An All-American offensive lineman, his Notre Dame teams played in the Orange, Gator, and Cotton bowls. In 1978, his senior year, Notre Dame led by quarterback Joe Montana won the national championship by defeating Texas and Heisman Trophy winner Earl Campbell 38-10 at the Cotton Bowl.

Hughes was drafted by the Forty Niners out of college after graduating with a bachelor's degree in business administration. In all, he spent eight seasons in the NFL with San Francisco, Washington, and the New York Giants, where he played offensive center with quarterback Phil Simms and Hall of Fame linebacker Lawrence Taylor.

Through it all, his Notre Dame foundation and the emphasis on more than just football played a key role.

"Achieving success at different levels of your life, regardless of what you're trying to achieve, is something that no one can ever take away from you," he says. "It was building relationships and establishing a chemistry, and it really allowed you to understand your own abilities and what direction you wanted to go. It was a strengthening experience, internally, and it definitely builds character substantial character."

After leaving professional football, he returned to the Bay Area and was hired in 1985 by Equitec Financial Group, a real estate syndicator based in Sunnyvale. After working in acquisition and disposition of a number of their properties, he moved into property management. He left Equitec in 1989 and moved to Goldsmith and Lathrop, owners and developers of the properties on the Emeryville peninsula. After these properties were sold in 1996, Hughes became just the third hire by CarrAmerica Realty Corporation for their Northern California operation. He started with CarrAmerica in early 1997, less than a year after the company had purchased the CarrAmerica Corporate Center (formerly the AT&T Center), the 1 million square foot complex at Rosewood and Owens drives.

On the surface, it might seem that the world of property management would pale in comparison to the bright lights of the NFL. While his job is certainly less physical than that of an offensive lineman, he finds that the personal interactions and chemistry with his staff and customers can mirror that of a championship team.

"I enjoy working with everything that property management has to offer the day-to-day operations, strategic development, market analysis, tenant relations, and enhancing the focus of CarrAmerica within Northern California. We're consistently evolving a solid team that is striving to win championships of another kind."

This is evidenced by the recently received Office Building of the Year (TOBY) award given to the CarrAmerica Corporate Center by the Local Building Owners and Managers Association. The center has since gone on to be recognized as the best suburban office park facility in the region and will vie for international honors in April in San Diego.

His efforts as the founder and co-chair of the Notre Dame Celebrity Golf Classic, benefitting the Ara Parseghian Medical Research Foundation, have helped raise over $150,000. Both he and his wife Maureen, president of Gridiron West, and their five children have dedicated many years establishing a team of Notre Dame alumni and friends who strongly believe in striving to make a difference for society and for a former coach who made a difference in their young lives.

In Pleasanton, Hughes is visible within the city's youth sports programs as an assistant football, basketball, and softball coach. As a mentor for the DARE program, he enjoys interacting with youth while encouraging them with the basics of his own philosophy to build a strong mind and a strong heart.

It's a personal philosophy that is mirrored by CarrAmerica's corporate beliefs.

"The core values toward achieving our goals are basically that of our mission statement, 'Serving the customer, serving the community, serving one another.' We're very sensitive to the fabric of the community in which we work and so here at CarrAmerica Corporate Center, reaching the Superbowl of a Tri-Valley business partnership is not only an expectation it is a reality of which we are very proud."