Linda Robles has Found a Home Providing One for Others 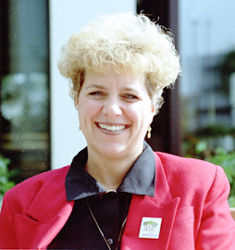 One of the most stressful decisions in life is choosing a career. It's no wonder, really - young people are routinely asked to pick a profession when they've had little first-hand experience with a work environment. Making any decision without the necessary information can cause stress, much less a major decision.

Linda Robles, the general manager of the Courtyard by Marriott hotel here in Hacienda as well as the one in San Ramon, is familiar with the pressure of making that choice.

"I was a very confused person and didn't know quite what I wanted to do," she says, smiling at what was her adolescent state of mind. "I always thought that maybe I'd like to be a teacher, follow in my dad's footsteps. He was a teacher and a counselor."

Her first interest in college at Fresno State, though, was fashion merchandising.

"I really thought I wanted to go into fashion merchandising but they kept stressing there was a lot of travel involved. I knew at that time I also wanted a family and I didn't want to be travelling and be away from my family, so that became a less-appealing option to me."

Her solution was to flip-flop, her major becoming marketing and fashion her minor. While that didn't solve her problem completely, it provided a valuable step and a way to enter the employment market.

"I got out of school and still wasn't quite sure what I wanted to do, but I had a friend working for the Residence Inn so I interviewed for a sales position at another location," she recalls.

She was hired in 1987 and discovered that the job was strictly a sink-or-swim proposition.

"I basically was given the job of getting business into the hotel," she recalls. "Most of the folks at that hotel had been given an account base to start with, which is how it usually is with sales, but for me they just wanted me to go out and get new business.

"I struggled the first year. It was tough - but through perseverance, I created an account base that was very loyal."

She also discovered that she had a strong affinity for the business.

"It was great working with the people, it was great seeing something that started out as nothing develop into one of the largest accounts for the hotel, and the hotel itself was great - Marriott gave us a lot of training and support, and the product was a great product to sell. After that, it was fun for me."

She stayed there for two years and was then promoted to director of sales in San Jose and spent a year there before becoming part of a team that would open the Residence Inn in San Ramon.

"Opening hotels was very enticing to me because it was starting from scratch, building your own base and your own team. I found I excelled at that," she says. The new location became one of the top-producing hotels in the region, a great success for Robles and her hand-picked sales team.

She became director of sales for the Residence Inn in Pleasant Hill and, with a taste of management experience, she was promoted to general manager, going from locations in San Jose to Fresno and finally Pleasanton.

It's a job with a lot of variety, a fact that she enjoys.

"From answering phones to checking guests in to coaching and counseling your staff," she lists. "You work with the owners of the hotel a lot, making recommendations on how to improve the building."

One of her favorite tasks is leading her team.

"I'll start the day with an associate briefing - tell them what's going on today, what our plans are, how we're doing numbers-wise educate them a little bit. I'll also talk to my staff about what they're doing - our focus lately has been to develop training classes based on service."

Like many service industry managers, one of her biggest challenges is in staffing.

"That's the toughest thing - getting people in here who are qualified to do the jobs and are people-friendly. It's a tough business; it requires a lot of long hours and a lot of friendliness."

Helping employees evaluate their own performance and satisfaction with their jobs and thus ending their confusion is another task that Robles enjoys. One more she relishes is teaching employees techniques to find a winning attitude, which calls upon her counseling skills.

"It's a lot of one-on-one communication and offering additional assistance such as training, if that's what they need," she says. "It's sharing what our expectations are and making sure that they're aware of that and that they truly want to do that.

"I like quoting from books to illustrate the idea that it's their choice and they have to make it, that they're the only ones responsible for who and what they are."

It's a message that she knows well, having made the same choices in her own life and career.

It's also interesting to note that her job has elements of teaching and counseling. She has in many ways ended up following in her father's footsteps after all.

Her favorite elements of the job involve her contact with people, "from the interactions with the associates and teaching them, to forging relationships with our guests."

Robles notes that her industry seems to be a good fit for people who enjoy a variety of tasks yet may not have been drawn to a particular career path in college.

"It's funny," she reflects. "I talk to a lot of people in this industry and so many of them have degrees that have nothing to do with where they're ending up, as a hotel general manager."

Then again, there aren't many colleges that offer multiple majors in sales, management, marketing, counseling, teaching, and facilities management. That kind of learning only takes place over time and is earned through experience.