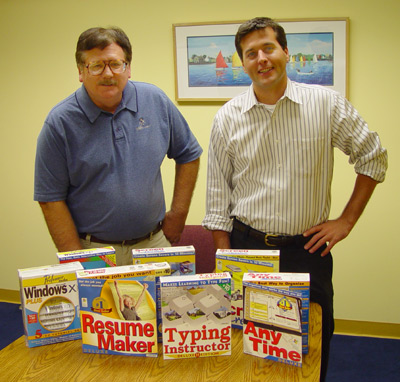 There aren't a lot of 20-year-old software companies around. In that arena, 20 years is like 200 as new technologies quickly come and go.

That's part of what makes Hacienda's Individual Software so unusual. Founded in 1981, Individual has emerged as a leader in the personal productivity software market, with products like ResumeMaker and the Professor Teaches training series leading the way.

"We've taken a patient approach," explains company founder, president, and CEO Jo-L Hendrickson. "Technology is the key: figuring out innovative features that will give you an edge in the market."

Keeping abreast of the current technology can be expensive - Hendrickson reports that the company spends 15 to 20 percent of its budget on research and development - but it has its rewards.

"A lot of the companies out there are not innovating anymore. They think their innovation is marketing, so they take the same old products and try to give them longer lives through marketing," he says. "We're out of the old school and believe that technology is what drives the market- that's why we were the first to be designed for Windows XP and why ResumeMaker was the first program to do online job bank searches."

It's an approach that has worked well. ResumeMaker, first released in 1989, is the leading program in its market segment, as is their personal organizer, AnyTime Deluxe.

The company also produces the market leading "Professor Teaches" series, which trains users in the use of Microsoft's latest operating systems as well as applications like Word, WordPerfect, Excel, Access, Front Page, and Dreamweaver.

Their focus on technology has also allowed them to add innovations to their flagship ResumeMaker and Professor Teaches products, both of which now have significant online components.

"Over the 12 years that we've developed ResumeMaker, we've developed a tremendous technology and knowledge in how to deliver a tool for job seekers to create resumes," explains Matt Hendrickson, who heads that business unit. "We brought ResumeMaker.com online, and that uses a Java program to deliver our tool and our content to help you create a professional resume online."

It's proven to be a brilliant move. Not only are individuals going online to create their resumes, the company has also created a private website for United Airlines powered by ResumeMaker which will be used by former United employees affected by workforce reductions.

The company has created similar levels of interest by adding features to its "Professor Teaches" products and taking them online on their eLearningToday.com web site. This move has opened up a new market for Individual as it expands into online corporate training.

The company is also working to expand its retail presence. They have acquired two programs, Total 3D Home and Total 3D Landscape, and will release new versions in January.

"There are many other products that we can invent or acquire," added Hendrickson.