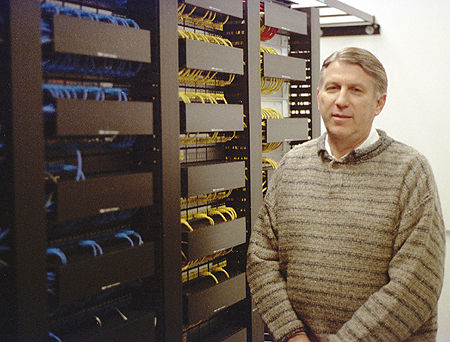 William Ostler, president of Randstad Communications, stands in a switching room with some voice and network equipment that the firm installed.

Randstad Communications, a subsidiary of Randstad, the world's third-largest staffing company, has moved its headquarters to 14,475 square feet at 4637 Chabot Drive.

Randstad Communications has additional offices in Fremont and Irvine as well as a team of field salespeople throughout the state. Despite the concentration of personnel in California, they have completed projects throughout the country.

Approximately 60 people work in the company's Hacienda office. The company has a talent pool of thousands to draw from, with a significant portion of them working at any given time.

The company was founded as TDSI in 1984 by four former Pacific Bell employees who took early retirement after the court-ordered breakup of AT&T. Randstad bought the firm in 1998.

The firm has three main areas of business. The largest portion of that, generating over half their revenue, comes on an hourly project basis.

"That work is usually for communication companies, the largest of which in California is Pacific Bell or SBC but also for companies like Covad, North Point, Verizon, and so forth," explains Randstad's president, William Ostler. Randstad's employees in this category serve as a temporary personnel pool that can be called in on projects when necessary.

The second category is engineering, which is billed on a project basis. "An example of that would be engineering the T-1 lines, the high capacity lines that connect office buildings on a campus," Ostler says. "We also work as consultants to people who have network or communication needs."

The company's third area of expertise focuses on equipment, such as cabling and installation of small phone systems or network systems.

"Anybody that wants a phone system, from six people to hundreds, or people who have a network and want it connected to the Internet, we can do that," he adds.

Ostler says Hacienda is a great location for the company since the park is also home to a number of telecommunications companies.

"That has already worked to our advantage," he adds. "We had a meeting yesterday with one of our clients that probably wouldn't have happened (at our old Fremont location) because of the drive involved between the two sites. We're within a few minutes here, though, so it worked out well."