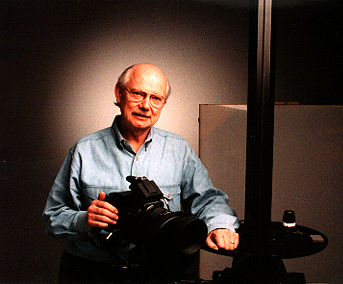 A strong foundation has always been important to Don Corning. Be it his faith or his technical knowledge, he has discovered that the magic of life happens more often when certain fundamentals are followed.

Corning was born in Denver, Colorado, and moved several times as a child - first to Oklahoma, then Texas, then to California. He was raised on the Peninsula and discovered music at an early age.

"I bought a saxophone, got in one small band, and shortly thereafter I was asked to join a band with a bunch of guys in high school," he recalls. "It was a dance band and we played every weekend, all over the place - senior balls, junior proms, fraternity and sorority parties."

It was an important time for Corning, whose studio specializes in commercial and product photography.

"It was an incredible outlet for my creative juices," he notes. "Music was a strong driving force as a creative outlet - it's always been a very strong part of my being and makeup."

It also demonstrated the importance of strong friendships.

"We were together for twelve years," he says. "Same guys, same band. I was in with a really neat group of guys and it was the only circle of friends that stayed in the area to go to college - everyone else seemed to leave for L.A. or New York. It was a great experience - good, clean fun, made some money on the side, and played our hearts out."

He continued with the band while attending San Jose State, where he got a degree in biology and chemistry. As a break from his rigorous academic classes, he took two photography classes in his senior year.

"I had a little interest in it and they turned out to be really fun - I had a blast," he says.

As it turned out, his father shared this interest.

"He was a sales rep for a chemical company and made a lot of 8mm training films - stop action animation, adding his own sound to his movies, things like that," he says. "We went to dinner one night after I got out of college and he expressed an interest in getting into a partnership with me in photography.

"We had no funds, we had no five-year plan, we had no clients, but we had each other - we got along really well. So we started the ball rolling the next day."

They started in his dad's garage in 1970 and grew quickly enough to move to a small studio, then a large studio, and finally a facility that allowed them to do custom color processing, lab work, studio shooting, and more. After his father's retirement, Don and his wife, Diane, moved to the East Bay and set up shop in Hacienda in 1982. Diane joined the business full-time in 1985 and works as his partner, managing the bookings, contracts, and all other business aspects of the studio.

Despite being immersed in photography for the last 30 years, Corning still professes a love for the art.

"I still pursue photography as a fine art form," he says. "Whether it's shooting a family vacation or a project here, it's not drudgery. It's just grown out of this love affair with photography.

"I love to capture the moment. Every picture that we take is unique- it's the only picture ever taken that's exactly like that. Everything you shoot is unique to you, like a thumbprint."

Despite his strong affinity with the creative side of things, Corning maintains an analytical view befitting a former biology and chemistry student.

"I was always fascinated with arts and science and the two seemed to fit really well together from my point of view," he explains. "It's the balance between the artistic side of me and the mathematical or scientific side."

Music, he explains, has an elaborate system of notation as well as harmonies "that can all be calculated in physics."

"Photography has a lot of analytical elements as well," he continues. "When you're shooting in the studio, you first have to get the foundation down - is it going to be exposed correctly, is it in focus, is it the right color scheme, and so forth."

That said, it's clear that the unexpected results of delving into his creativity is what Corning finds most exciting.

"A lot of times you get surprises that you didn't expect - you push the limits and you can get things that you never thought you could achieve, whether it's in music or photography," he explains.

Without an analytical basis, however, those creative breakthroughs are hard to come by.

One example of Corning's creative process is the Hacienda arch photo which is used by the park on many of its publications. (For example, it appears on the top of page 8 of every issue of Hacienda Network.)

"Prudential (Hacienda's developer) hired us to do the shot because they had a slot in their national promotional calendar," he says. "It was raining a lot then and the arch wasn't quite done so I had to go out there probably seven or eight times to find an angle that would represent the concept of Hacienda."

After weeks of rain, the deadline approached and Corning had been unable to get the shot he wanted.

"I think our deadline was the next day so I set up at the angle I wanted. It was just about ready to storm, but I got the picture and then ten minutes later it was gone - the storm came in."

One might say that luck played a role in the shot, since the exact window of opportunity was so small. However, without his knowledge, preparation, and previous site visits, Corning never would have been able to take advantage of that situation.

"It's one of those moments in time but we went out many times to get it," he says. "Now the shot is used quite a bit."

Corning's technical skills also proved to be important in 1996, when he became one of the first six commercial photographers in the Bay Area to begin using a digital camera.

When he first investigated digital photography, he was concerned that little of his previous experience would transfer over into the realm of RAM and hard drives. It turned out that the computers made his job easier, thanks to his knowledge and experience.

"(Technical knowledge) is like building blocks," he says. "What you did yesterday builds up into today's work and you can draw from many places and then put those together.

"When I saw how they were analyzing images with histograms and densitometers, I recognized the old 'Zone System' of determining exposures."

He quickly took to the new medium and it has proven to be a very smart move. "Now all I do is digital," he says. "It's light years ahead. I haven't been in my darkroom in a year."