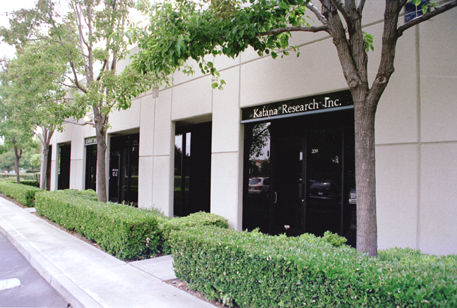 Behind this door waits the future of optical laser surgery.

Company Hopes to have New Optical Laser on Market by 2003

One of the biggest developments in vision correction over the last 20 years has been the use of lasers in optical surgery. In fact, laser eye surgery is currently a $3 billion industry.

Despite the apparent safety and effectiveness of current techniques, there is still room for improvement, however. That's where Katana Technologies comes in.

Katana is a company headquartered near Berlin, with a research and development arm here in Hacienda.

"The Katana mission is to be a leading player in the laser field and, in particular, in photo-refractive surgery," explains Katana's Sabina Narduzzi. "Our goal is to develop ongoing technical innovation in the field and to deliver best-in-class products to market."

The company, which is currently building prototypes in its West Las Positas Boulevard facility, is creating a new laser which will deliver many improvements to existing technologies.

"The Katana laser will be capable of reshaping the cornea to basically any desired pattern," explains Narduzzi. By changing the shape of the cornea, surgeons can correct near-sightedness, far-sightedness, and astigmatism.

While doctors have used lasers to reshape the cornea for many years, Katana's technology represents a new step in the evolution of laser surgery.

Rather than rely on existing excimer laser technologies, which use toxic gases, Katana uses a proprietary diode-pumped solid-state deep UV laser to do the work. That means a more compact size, lower maintenance costs, and no need to handle toxic materials.

Another advantage to Katana's device is the integration of a fast eye-tracker which allows the laser to compensate for eye movements during surgery.

The company hopes that these factors will enable it to create a laser which will fill all the needs of patients and surgeons.

"This is what experienced refractive surgeons have envisioned as the path to an 'ultimate procedure,'" explains Narduzzi.

The company was founded Germany in April, 2000, and opened their Hacienda facility last November. Katana Research currently employs 10 in Pleasanton but that number is expected to grow to 30 by 2003, when the company hopes to introduce their laser to the European market. Katana hopes to begin selling their product in the U.S. in 2004, after FDA approval of the device.