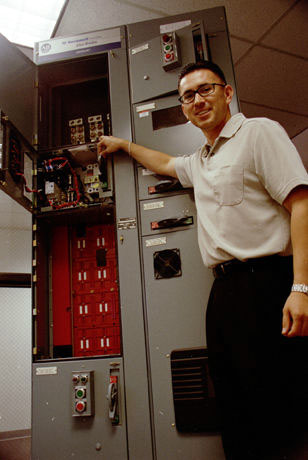 What do Mother's Cookies, NUMMI, and countless area semiconductor facilities have in common? The answer could be chips - chocolate in the cookies and silicon elsewhere - but it's not. They're all local facilities that use equipment from Hacienda's Rockwell Automation.

The company offers tools to automate and control any industrial process, whether it's parts fabrication, assembly, or a task like filling bottles with soda.

In fact, Rockwell Automation is involved in some of the highest profile projects around.

"One of the things we're working on right now is the National Ignition Facility project at Lawrence Livermore Lab, which is part of the Stockpile/Stewardship program for the Department of Energy," says Darryl Hom, sales team leader. "We're working on control systems for that project, which involves 192 laser beams shooting at a piece of material."

"We work a lot with NUMMI (the General Motors/Toyota joint venture) on many of their different systems, everything from the conveyor systems to the stamping of big rolls of steel to make the body parts," he adds. "We also work with their assembly systems, their paint systems, their facility systems"

The Hacienda office provides sales, service, and application design for customers throughout Northern California and western Nevada. It also serves as a district office for the Pacific Northwest, with smaller offices in Seattle and Portland reporting to the Pleasanton facility. Globally, Rockwell Automation employs 40,000, with 38 in the local office.

The company's products are used outside manufacturing settings as well. Many of their Motor Control Centers are used to operate rides at Great America, for example.

"We also have control systems set up in the Sacramento Airport where they have all their concession stands, MacDonald's and Starbucks, that monitor the energy that each of those businesses is using," says Hom. "That's something new."

With over 40,000 individual components and piece parts to choose from, the company is constantly working with customers to come up with customized solutions. The huge number of parts and possibilities gives an added challenge to sales and engineering staff who have to think creatively in finding the best tools for their customers.

"Everybody wants to do something better - less costly, faster- and that's what we help customers try to do," says Hom.

With the savvy staff available to area customers, it's likely that that goal is one that is achieved frequently.