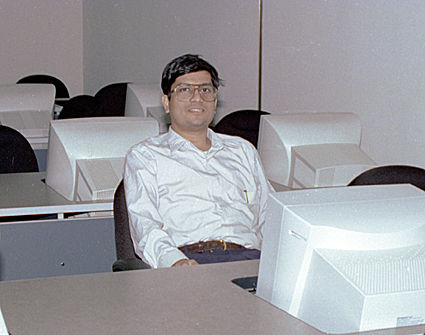 Network Software Firm is the Latest to Move Headquarters to Pleasanton

AdventNet, a software company that provides network management tools for hardware manufacturers, telecommunications companies, and web hosting companies, has moved its headquarters to Hacienda from its former location in the South Bay.

The company, which also has a large development center in India and sales offices in New Jersey and Ontario, was founded in 1996 and already boasts an impressive client list with names such as Cisco, Nortel, Lucent, Qwest, AT&T, and Worldcom.

A Simple Solution One key to the company's success has been their ability to create tools that enhance the productivity of network developers and managers.

"(A network) won't do anything until you configure it with software and also manage it, meaning if anything goes wrong it sounds an alarm to alert a network operator to fix it," explains Sridhar Vembu, the company's president and CEO. "They need to provide those kind of functionalities and our software does that."

Available for Download The company makes its software available for download from its web site, allowing customers to take it for a test drive before making a decision to deploy it on a large scale.

"They evaluate it and if they like our software, they purchase it," adds Vembu. "It's an extremely efficient model."

Once it is decided to use AdventNet's solutions, the company's work begins again.

"When somebody buys our product, it requires some level of customization, training, and support," he says. "It's not like Microsoft Works where you buy it, install it, and start using it. There's a lot of work in implementation that happens, three months to sometimes a year in a large scale project."

That training is conducted both on-site and in Hacienda, which houses the AdventNet's technical consulting staff as well as its executive team, sales and marketing staff, and other financial and administrative personnel. The Pleasanton office currently totals about 25 people but that number is expected to double "in the next year or so." The development office in India has the largest staff, with a team of 250.

Vembu points out that the company has shown a history of steady, profitable growth.

"We are still privately held and never took any venture capital," he says. "In each of the last four or five years, we've grown profitably, and that's the key. Despite our small size, we are actually quite stable."