David Hong's Road Takes Him From South Korea to Pleasanton 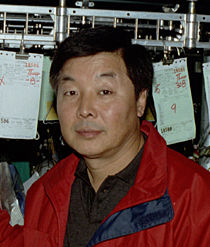 David Hong remembers the first morning he woke up in America as though it were yesterday, even though it was nearly 23 years ago.

"It was July 2, 1978," he begins. "I was visiting my brother at his house in Sunnyvale and we stayed up until 4:00 talking about things. In the morning, I could hear all the birds singing and it was beautiful outside. The air was fresh - at the time, the air in Korea wasn't very good.

"My brother had this music playing, 'New World,' and I thought, 'This really is a new world to me.' I still remember that first day of excitement."

There have been a lot of exciting days since then for Hong after he and his wife emigrated from Korea to the United States.

He almost ended up in a different country, however: China.

"I graduated from the Korean Foreign Language Study University and studied Chinese political science," he says. "I had a great deal of interest in China and was going to go there. I have a lot of friends in China who are still there, in fact."

Thanks to his brother's pleadings, however, he travelled to the U.S. first and decided to move here.

His first year in the country, he worked assembling electronics by day and as a bartender at night. He took a screening test for U.S. Post Office applicants, passed it, and was called in a month later for an interview.

"I was lucky to be called in so soon and to be hired as a clerk," he says. "I did about six months as a distribution clerk - a night job, I hated that job - but then I was hired as a window clerk."

Suddenly, the negative aspects of the job disappeared and he settled into a position where he had weekends off and a relatively high rate of pay.

"For about five years I was at the post office - selling stamps, taking parcels. After three or four years I got three weeks of vacation every year," he recalls. "It was a very good life but it's the kind of life that's boring. Just come back home and watch TV

"So one day it hit me - it's not my life, it's not how I'm supposed to spend my time. I have a purpose! This is the country of opportunity- I have to do something."

With the support of his wife (and despite the skepticism of those in his family and church) he left the post office and began a new job as a residential real estate agent.

It turned out to be an important change and one that set the direction for the rest of his career.

"I started to work at Hamilton Century 21 in San Jose and for three or four years, I was very hot," he says. "I was the top salesperson."

As the real estate market was cooling in 1989, he was working on an investment transaction for himself and several family members: the purchase of the 142-room Days Inn on Hegenberger Road in Oakland.

After the purchase, the group needed someone to manage the facility. Enter Hong.

"There were seven family members involved in that and they all had other careers - a dentist, an engineer I'm the only one who's a candidate to be the general manager and acting owner. It was perfect timing for a new job so I started in July of 1991."

For nearly six years, he oversaw every aspect of the hotel's 55-person operation: staffing, reservations, and a host of other activities. When the group decided they wanted to sell, Hong looked for another hotel that he could invest in alone.

"I looked all around, from the Bay Area to Bakersfield, Sacramento to Stockton. Finally, my real estate agent suggested I look at this business, Hacienda Cleaners."

Despite the fact that he "knew nothing about dry cleaning," he had a look at the property. There were several similarities between running a hotel and a cleaners: the personnel and administrative aspects, the approach to customer service. It would also give Hong an opportunity to work with machinery, something he first enjoyed as a young man.

"My father had a mill in Korea where they made products like sesame oil, and there's a lot of machinery involved in that," he says. "I had five brothers but I was the only one who took an interest and would help him, so I learned from him when I was very young how to use tools, how to take care of a problem machine. The other guys had excuses, they didn't like to get their hands dirty, but I didn't mind."

Hong purchased the cleaners only to find out that there were more opportunities for fixing problem machines than he felt he had been led to believe, which meant he needed to replace much of the business's equipment.

"The dryers stopped working, the washers were horrible," he recalls.

On the bright side, however, the new equipment has made it easier to provide a quality service, something which Hong emphasizes.

"Even though I have a thousand customers, I talk to each one as though they're the only one I'm dealing with," he explains.

He's also learned the importance of keeping his customers happy.

"It says here on our card, 'Satisfaction Guaranteed.' That means if we do something wrong, we pay for it - we don't hassle. That way, we can still have a good relationship. That policy works."

Another winning policy has been their pick-up and delivery service, which currently serves the region from Alamo to Livermore and Castro Valley, which generates about 60 percent of their business.

He notes that Hacienda Cleaners now works with about 15 companies in Hacienda, including Intira, ProBusiness, Robert Half International, Shaklee, and Tanner Insurance, providing pick-up and delivery of employee's clothes.

Above all, he's happy with the destination at which his career path has arrived.

To Hong - and to his parents and all five brothers, who have also emigrated - the U.S. still is the country of opportunity.