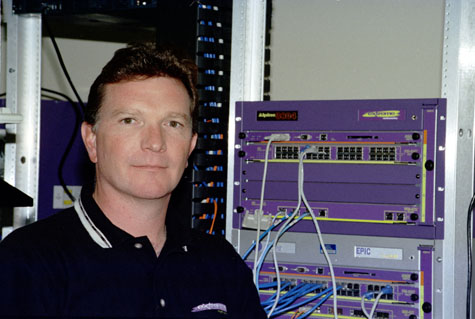 Extreme Networks, a company that specializes in hardware and software for switched broadband networks, has leased over 60,000 square feet in Hacienda at West Las Positas and Hacienda for its Access Business Unit. The company's primary customers are large enterprises and broadband service providers.

"The majority of Extreme's products are sold to provide internal networking, what we call enterprise networking, inside a customer's facility," explains Darrell Scherbarth, vice president and general manager of Extreme's Access Business Unit. "We have large customers like Compaq and Apple Computer using our products to wire the large numbers of PCs that they have."

The Access Business Unit provides products and technologies that complement Extreme's enterprise networking products with a variety of "first mile" products which connect facilities to existing networks, whether they be Internet switches at telephone company central offices or privately-owned metropolitan area networks.

"We're focused (here) on developing products which extend our Ethernet and IP switching technology into areas where we can expand into first mile access," says Scherbarth. "Some of the technology that we've developed is being used, for example, to connect our facility in Pleasanton to our headquarters in Santa Clara. Thanks to our products, we become a transparent part of their network over the multiple T1 telephone circuits that we've run between here and Santa Clara."

The division has also produced technology which allows broadband access at speeds of 10 megabits and higher into multi-tenant facilities such as high-rise office buildings.

"We would locate a device in the wiring closet or basement of the building where you might have 15 to 20 tenants. That would allow us to provide 10 megabit Internet access to each tenant in the facility."

The Access Business Unit was started in January 2000 as a separate company, OptraNet. Extreme was an investor in OptraNet and, as part of that investment, acquired an option to purchase the company which they exercised at the end of last year. As of February 1, OptraNet became a business unit of Extreme.

"The technology we've developed internally here to date has been fiber-oriented, but as a business unit we're assuming responsibility for additional technologies," says Scherbarth. "In Europe, for example, service providers are doing fiber wiring to subscribers and we offer fiber-based products with 100 megabits per second on the individual fibers.

"We're going to continue to pick up responsibilities and look at new technology areas as well. There are a variety of technologies in wireless and fiber that we'll continue to develop."

The company currently employs approximately 45 people in its Hacienda location but has plans to employ as many as 300. The group is composed primarily of engineers with product development duties, along with marketing and support staff.