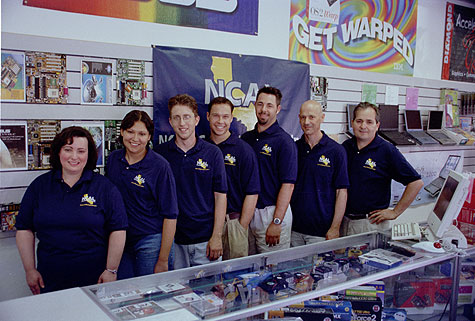 When you're buying clothes, there are two choices: off the rack or custom tailored. That's also true of computers, and the employees at NCAL Computer Source see themselves as tailors of custom computing solutions.

"Many stores sell computers that are already assembled so it's sometimes not exactly what you want," explains Jose De Oliveira, NCAL's general manager. "In a way you're forced to buy something you don't want."

While NCAL offers some off-the-shelf packages, their bread and butter is creating systems from the ground up using cases, motherboards, hard drives, and peripherals of a customer's choosing. Their staff of 14 includes technical experts that can help evaluate a customer's needs, whether it's for an individual system or a client-server network.

The products they carry read like a who's who of the computer industry. They sell motherboards by Intel, ASUS, Tyan, Microstar, and Gigabyte; hard drives by IBM, Western Digital, Maxtor, and Seagate; tower or rack-mounted cases; CPUs by Intel and AMD; and other components and peripherals from top manufacturers.

"For us, the customer makes the computer," he says. "They tell us what they want and we build it for them."

NCAL offers a number of services to go with its computers. The company can install networks, including routers and cabling, as well as provide ongoing service through service contracts or their in-house service department.

"We have acquired a lot of technical knowledge about different operating systems the different varieties of Windows, Linux, and Unix," he says. "In fact, we've been delivering a lot of Linux machines to Lawrence Livermore and Sandia national laboratories."

Customer service is a major focus of De Oliveira and his staff and it's reflected in every aspect of how the company does business even the layout of the store.

"It's set up a bit like an old appliance store, where you come in and talk to someone at the counter and they help you with what you want," he explains. "You don't have to wander around looking for something you need. We think that's important."

As might be expected from a company that builds computers from the component level up, NCAL houses a vast parts inventory that De Oliveira thinks is the largest in the Tri-Valley.

"We have thousands of parts anything you need, we have it," he says. "Cables, monitors, cases, motherboards, video cards. We do rack cabinets, we do network hardware. We supply all of it."

The company has seen a great deal of growth since it was founded in a garage in 1993. They're in their third Hacienda location, having outgrown the previous two, and plan on further expansion.

"Our intention is to open another place in Livermore before the end of the year and another store in Walnut Creek," De Oliveira notes.

He is quite happy to have built the business in Pleasanton, though. "

I think Pleasanton is a great place to do business," he says. "A lot of companies are coming to the Tri-Valley and I think it will continue to grow."