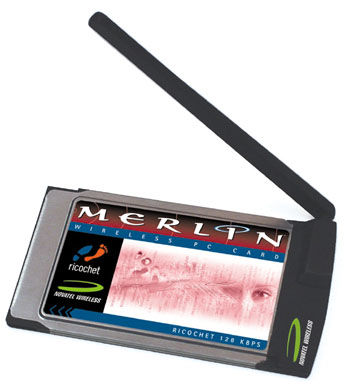 A PC-card modem like this is all a user needs for 128kbps wireless service.

Thanks to a recent upgrade of Hacienda's Ricochet mobile wireless system, users can now get wireless Internet access at speeds of 128kbps throughout the park and much of the Bay Area, as well as a growing number of cities throughout the U.S.

"It's an ideal solution for the mobile professional, the knowledge worker who needs fast access to data wherever they are," says Erin Butler, speaking on behalf of Metricom, the company behind Ricochet.

Ricochet has been available here since 1996, when Hacienda became the first mixed-use development to be outfitted with the company's wireless communication system. At that time, however, data throughput topped out at 28.8kbps. The recent upgrade brings that speed up to a minimum of 128kbps, more than twice as fast as a dialup connection.

"It's critical to note that 128kbps is the actual speed to the end user and not just theoretical," adds Butler. "People will get speeds that are faster - it's engineered to deliver 128kbps all the way to the user, 80 percent of the time."

Ricochet uses radio frequencies to send data packets to nearby pole-top radios which then relay the data to a wired Internet access point.

Signing up for the service is simple. Butler notes that Ricochet wireless modems can be purchased at retail outlets such as Fry's, Staples, and CompUSA along with an installer disc and activation information. It's also possible to sign up with one of Metricom's service partners, which include EarthLink, GoAmerica, Juno Online Services, and WorldCom.

Computers using Windows 98 version 2 and higher or the Macintosh OS are required. Several different modems are available including serial modems and PC-card modems.

For additional information and technical details, access the company's web site at www.metricom.com and click on "Get Ricochet."