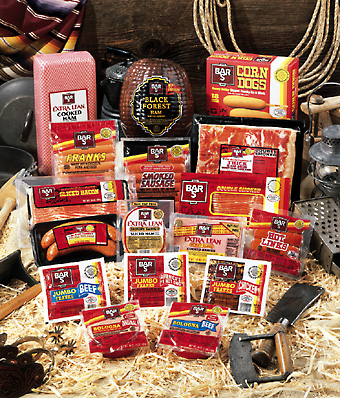 The Bar-S family of products includes everything from franks to ham, sausages, bacon, and bologna.

Americans love big juicy hot dogs and their hands-down favorite is the Bar-S Brand One Pound Original Jumbo Frank. It's the best-selling jumbo hot dog in America for the third straight year according to a recent independent survey, says Sharon Sage, northwest region manager with offices in Hacienda. In addition, Bar-S foods are so popular nationally that they rank first or second in hot dogs, bacon, lunchmeat and dinner sausage.

When it's lunch time, it's Bar-S Foods time. Products include hot dogs, bacon, lunchmeat, ham, sausage and cheese. This company produces over 230 processed meat products. They are marketed in all 50 states and a number of foreign countries for national and international retail, service deli and foodservice markets.

Sage says that the company has many important strengths. "Doing what our customers want is important to us and that includes being a value leader and giving the best possible quality and price to the consumer. We just try to give you the best product for the best price and we've been very successful in doing that."

The Hacienda office, at 5994 West Las Positas Boulevard, Suite 209, serves as the Northwest California Region Center and as a home office for Sage, despite the fact that she's not there very often. Sage's sales duties keep her on the road traveling through Northern California, east to Reno, and north to Ashland, Oregon, plus the states of Alaska and Hawaii.

Sage says that the U.S. sales division is geographically organized into the Western Region, Central Region, and Eastern Region. Within the three regions there are 11 Customer Service Centers, strategically located to best service Bar-S customers. Foreign customers are served by an International Sales Division that is headquartered at the Corporate Office in Phoenix.

Bar-S began operations in 1981, when managers of the former Cudahy Company that had the Bar-S brand acquired Cudahy's facilities, brand names, and other assets. Today, the company is still management-owned and headquartered in Phoenix. It is recognized as one of the ten largest privately-held companies in Arizona. It ranks among the top 40 largest meat- processing companies in the United States with plants in Clinton, Altus and Lawton, Oklahoma and distribution center in Elk City.