Marcy Place Brings Exuberance to Whatever She's Doing, Whether it's Commercial Real Estate or Olympic Sports 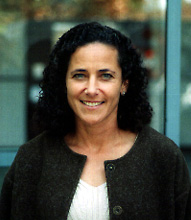 Marcy Place has always been someone with a natural enthusiasm.

"I think it is just innate in my personality," she says. "I've got lots of energy - I've always been confident with myself, to walk into a situation and be able to deal with it, or if I can't deal with it to 'fess up and say so."

Some people gather as much information as possible, pausing thoughtfully to choose a course of action, while others move more quickly. Place moves so fast that it's a wonder anyone can keep up.

"I'm driven to do well, until I get tired," she smiles, pausing for effect. "I wonder when that will happen?"

So far, nothing has tired her out. Not an eight-year career on the U.S. National Field Hockey team, including appearances in two Olympics, and not her fifteen-year career in commercial real estate. Even her husband and two young boys are yet to phase her, despite her youngest son's resemblence to their mother.

"My little one is just like me," she says. "He's this ball of energy, constantly on the move, constantly doing things."

"Constantly on the move" is a pretty good description of Place as well. A Bay Area native who grew up in Burlingame, she moved after her freshman year of high school when her mother attended graduate school at UC Davis.

"I had to get involved in something to meet people, so I started playing field hockey because I didn't want to run cross country and I couldn't jump well enough to play volleyball. Field hockey, at the time, was the only other alternative."

She went to college at Cal and played the sport as a walk-on, earning an invitation to try out for the National Team in 1980, her senior year. The U.S. had boycotted the Moscow Olympics that year and two players had retired, which provided her with the opportunity she needed.

"It's certainly not a big money or popular sport, but you do it for the love of it," she recalls.

She spent the next eight years criss-crossing the globe, playing in competitions in Europe, Australia, the U.S., Asia - any place where field hockey was popular.

"Travelling around the world, doing something you love, with 15 other women - how great is that? It was a wonderful time in my life."

Off the field, things were challenging in a different way. Her travel schedule - she spent an average of six months every year on the road with the team - made earning a living much more complicated than it would have been for a typical Cal economics grad. Her travel and expenses were paid when she was with the team, but the rest of the time she was on her own.

"I did all kinds of things," she recalls. "It was funny. I look back at all my tax returns and until I went to work for Coldwell-Banker, I was making $5,000 one year, $8,000 one year. But I was happy - money was just not an issue then. It was all about training and getting on the next tour. It was a great lifestyle, fabulous."

After her first Olympics, though, she decided that she needed to pay a bit more attention to life after field hockey.

"I was 25, 26 years old and I felt like I needed a job if I was going to stick around for another quadrennium so that when I was retiring, I wouldn't be looking for a career at that point."

In what can only be termed a fateful coincidence, Coldwell-Banker was an Olympic sponsor at that time and, through the U.S. Olympic Committee, Place was given a position in a work/train program that accommodated her athletic schedule.

"I'd like to say it was some sort of master plan, but I just tripped on it," she says. "I didn't even know what it was when I started interviewing for the job. I had to go through a learning process of what commercial real estate was."

What it turned out to be was a perfect fit for someone of Place's exuberant temperament.

She's just celebrated her 15th anniversary in the field, with ten years at Coldwell-Banker and CB Commercial and the last five with Cornish & Carey. She specializes in office and R&D leasing in the Tri-Valley.

"I represent a number of buildings in the area for landlords that I've worked with forever - most of them, I started working with very early in my career." Among those clients are Britannia Development, who have built eight projects in Hacienda, and the Cranbrook Group, who have also built in the park.

Her amazing rate of production- she closes between 50 and 75 deals per year, on average - is an indication that she's as much a force in her field as she was as an athlete.

Obviously, her energy and commitment are important ingredients in her success. She explains that there is an additional key to building a relationship with customers.

"I think the most important thing is trust," she says. "They need to trust you as a person, that you're going to do the right thing, and that you're competent to do what they're asking you to do - that's first and foremost when you're meeting with somebody. You've got to establish that and the rest falls into place."

While the adventure has changed, she has managed to find new challenges to replace her old ones. If she ever has a chance to earn a medal for real estate leasing, she's sure to be a contender.