Rudolph and Sletten is Building a Future in Hacienda 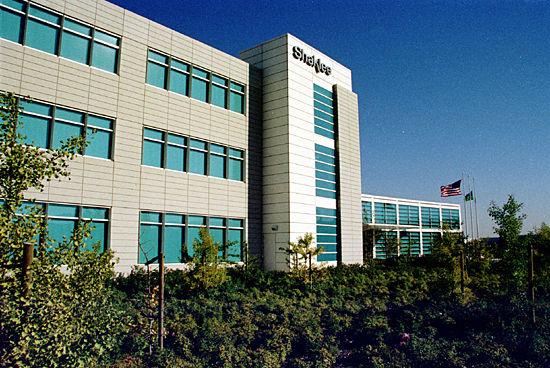 Among the many projects constructed by Rudolph and Sletten is the Shaklee building, one of the park's most recognizable facilities.

Rudolph and Sletten, one of the largest construction companies on the West Coast, has opened a new office in Hacienda at 5980 Stoneridge Drive, Suite 111.

The new office will initially serve as a "drop-in center" for company staff, providing workspace and computer network access for employees living or working in the East Bay as well as meeting space for all personnel. Eventually, however, the company sees the office as a key to expanding their presence in the Tri-Valley.

A Distinguished Past Rudolph and Sletten's origins can be traced to 1959, when "Rudy" Rudolph started a construction company, with his chief assets being two employees and a pickup truck. Joined by Ken Sletten in 1962, the company's growth has paralleled that of Silicon Valley. Rudolph and Sletten now ranks as the seventh largest builder in California and the 45th largest general contractor in the nation.

Their client list reads like a who's who of Northern California business. The firm has constructed campuses for Hewlett-Packard, Intel, Advanced Micro Devices, Apple Computer, 3Com, Sun Microsystems, Genentech, Bayer, and Chiron, as well as UC Berkeley, the University of San Diego, and USC.

Rudolph and Sletten has been active in Hacienda as well, having built the Shaklee headquarters. This unique facility has been recognized as the most environmentally-friendly building in the Bay Area.

Increased Productivity and More Brahim Satoutah, a senior mechanical estimator for the company, works full-time from the new office. A Pleasanton resident, he says that his life has been changed by the new office, which allows him to avoid his former daily commute to Foster City.

"For me personally, it's been a great help mentally and physically," he says. "Now, I'm more productive - it's a different state of mind."

While the new office is undoubtedly a convenience to East Bay employees, he notes that the company has broader plans for the office.

"To us, it is convenient for our employees but at the same time there is a goal in mind: to increase our presence in the Tri-Valley. We believe that the Tri-Valley is going to be a hotbed for high tech and we want to be able to market from here and have this office generate work."

Rudolph and Sletten is already submitting bids for work in the area.