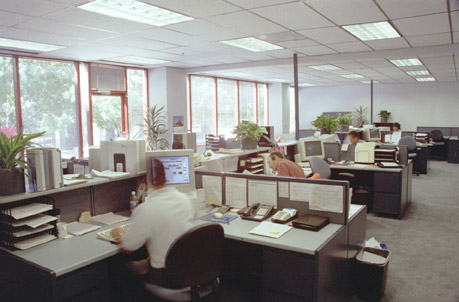 The short-walled cubicles of C.H. Robinson's Hacienda office allow employees easy access to each other in the fast-paced environment.

A transportation company that doesn't own any trucks, trains, or ships might seem like a novelty. It's a formula that's worked quite well, however, for C.H. Robinson Company, which recently opened an office in the park. Despite not owning any equipment, they provide outsourced transportation services for a host of companies, totalling 10,000 truckloads per day across the country and countless other shipments via rail, air, and sea.

"Our business model allows us to be flexible to our customers' needs, because we can react more quickly to those needs," explains Joseph Barsi, general manager. "We have 20,000 contract carriers in our system with over 800,000 pieces of equipment and that lets us match up the right service to our customers."

In addition to the vast number of contract carriers available to the company, C.H. Robinson also handles overseas shipping by sea, air, and other forms of transportation. Shipments by a combination of rail-and-truck - known as "intermodal transportation" - are the responsibility of the Hacienda office.

"This is a strong market for intermodal because that method is only economical when your product moves 1,000 miles or more," explains Todd Traut, intermodal operations manager for the enterprise. "Most of the freight that moves east out of California goes at least that far - it's almost 800 miles just to Salt Lake City."

C.H. Robinson was founded in 1905 as the buying arm for a Midwest grocery wholesaler, sourcing produce for customers and transporting it to their locations.

"We got our culture from hauling produce, which is one of the most demanding items to haul," adds Barsi. "Because it's perishable, it has to be kept at a certain temperature, treated with care, and spend as little time as possible in transit. Transportation evolved into a broader business for us."

The company's intermodal division started in the 1950's, when trailers were first "piggybacked" onto railroad flat cars. Now, it's a common practice - the company has contracts with over 800 carriers across the country who specialize in drayage, as the practice is known, as well as all of the major railroads.

The Hacienda office is responsible for intermodal operations for the Western Region, which consists of everything west of the Rocky Mountains plus Texas.

"We also support our branch offices in Mexico," Traut adds. It's a big job, but it's a big company - C.H. Robinson has 138 offices in the U.S. and others in Europe and South America.