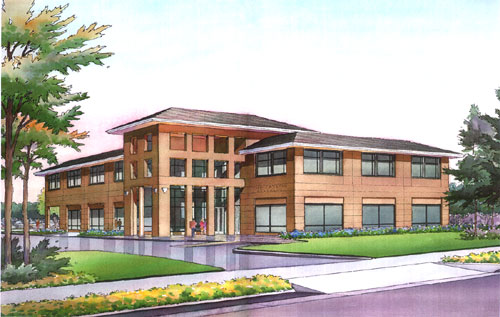 The new P.J. Livingston development will be called "The Taylor Building," after the oldest son of company president Mark Barkdull

P.J. Livingston Co., a development firm with properties throughout California, has received approval for construction of a 24,600 square foot office building at 4733 Chabot Drive in Hacienda.

The firm is currently negotiating with a number of potential tenants for the facility, for which construction is expected to start by the beginning of the year.

Mark Barkdull, president of P.J. Livingston, explains that the company intends to include features that will make the structure an architectural showcase.

"We're trying to do a more traditional style that we think will be timeless, and in so doing we're designing a more expensive facility to build," he notes. "But because Pleasanton is my home and I think Hacienda is a premiere location, I wanted to make this a building that is going to stand out."

A Hypostyle that's the Peak of Style

The most striking element is the hypostyle, a roofed area resting on rows of columns, which will serve as the entryway and offer a stylish transition from outdoors to indoors. Nearly a full story higher than the rest of the structure, the upper portions will consist of two rows of punched-through openings, supported by the tall columns.

"The idea is to draw the outside into the inside of the building," notes Barkdull.

That thought is also central to P.J. Livingston's choice of building materials, which Barkdull describes as "warm and welcoming." It's a fitting look for a facility that Barkdull has dubbed "The Taylor Building," after his oldest son.

Among the facility's other notable features is the mansard roof, which will be finished with slate. According to Barkdull, that particular detail was inspired by another Hacienda structure, the Signature Properties headquarters at 4670 Willow Road.

"I've always admired that building and wanted to do something in the same vein as that," he says.

The team at P.J. Livingston has been developing California properties since 1974 and has a number of projects in Santa Clara, San Jose, Fremont, and Newark, as well as Southern California locales such as San Diego and Orange County.

They have recently finished construction on a 65,000 square foot facility in Pleasanton which has been leased by Hitachi Corp., as well as a Santa Ana office building which is currently being leased. The company is currently overseeing construction of an 88-unit condominium complex in Park City, Utah.

It's clear that the Hacienda project will receive more than its share of Barkdull's attention, however. "

I live in Pleasanton and drive through Hacienda every day," he explains. "It's a beautiful park and, as far as I'm concerned, there's nothing else like it."