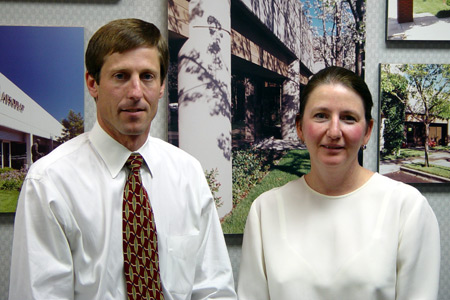 Being a real estate developer is a bit like being an attorney. The public's perception of your profession tends to be colored by the small minority of its practitioners who exhibit unethical conduct.

In reality, of course, most developers realize that there is little to gain, either in cash or experience, by skirting the rules. Some, like Donna Batchelor and Scott Graeser of Chamberlin Associates, have gone way beyond mere expediency in choosing their careers. They have chosen their profession because it offers them the best opportunity to express their personal values and business philosophies.

"For the most part, we're a true investment developer, so we develop and design our product to hold for the long term," says Graeser.

While many other developers seek only to build a property and sell it as quickly as possible, these two executives believe that their time is better spent in creating long-term relationships with both their properties and their tenants.

"It's the process that makes anything in life rewarding - it's not the money that attracts me to this business or anything in life," she says. "It's putting something together that we can hold and care for, which is much more rewarding and fulfilling."

Chamberlin Associates was founded by Steve Chamberlin in 1994, when he acquired the business and properties from what had been the California regional office of Rouse & Associates (now Liberty Property Trust). Batchelor and Graeser had worked for Rouse with Chamberlin prior to the changes and remained with the firm. Steve Chamberlin retired from running the company over two years ago, leaving his two vice presidents in charge of the business.

That might be a difficult proposition for people accustomed to having just one person who wields the ultimate authority at a business. For Batchelor and Graeser, however, their shared values and experiences make joint rule a relatively simple task.

"It's pretty much been a natural evolution - we've worked together for about 15 years," says Graeser.

"Our talents complement each other, so we cover the whole operation," adds Batchelor. "We work well together and we work well with Steve."

The two have their responsibilities evenly divided. Batchelor developed the property management side of the business, building the infrastructure necessary to manage their one million square foot (and growing) portfolio. Graeser oversees the development and marketing side of the business.

Again, the pair's focus on long-term business relationships helps define the course of action the company takes on a day-to-day level.

"We look at real estate and projects a little bit differently from the average bear," says Graeser. "Because we want things to work long term, we really focus on location and quality. We're going to own them, we're going to deal with any problems that arise, so we'll put in extra parking, extra glass, and extra landscaping. Instead of trying to maximize the amount of square feet we can put on a piece of land, we're looking for a balance."

They both credit Steve Chamberlin with instilling those values.

"We agreed with that business model and that attitude and philosophy. We started in different ends of the business but we've both grown with the firm," says Graeser.

A native Philadelphian, Batchelor entered the real estate industry in that city's suburbs in 1982, in the capacity of administration management for Rouse & Associates.

"My interest in the real estate industry actually developed while I was employed by Rouse & Associates - I owe a great deal to Bill Rouse for that," she says. "When I was still in Philadelphia, I actually oversaw the construction of a 94,000 square foot building expansion and that really whet my appetite."

After she tasted the creative aspect of the industry, there was no going back.

"Once I completed that project, which was 1985, I started looking for other opportunities within the company and Steve offered me a position in the California region to develop and head up the property management role that they would have coming on line in '86."

Graeser also got involved in real estate development through a personal invitation from Chamberlin.

"I was originally involved more in the service end of the business - mortgage banking," he recalls. "I was primarily on the residential side and we provided financing for residential developers. It was exciting but it was truly a service; there was no tangible product involved. I wanted to get involved in the other end of it, where you actually have a product that you're selling so I went back to business school to break into that area.

"Steve was teaching a real estate development class that I took at Cal and I joined the company not long after that, working out of a marketing trailer at one of our developments in South San Francisco."

Graeser notes a certain irony in the direction his career has taken, however.

"We do produce tangible assets and things that you can go out and touch, but our business really does come down to service - whether we're serving the tenants or the broker community."

Their belief in the value of good service is reflected in the management decisions they've made over the years. For example, no one who calls the firm ends up leaving a message in voice mail. They can't - they don't have it.

Their emphasis on lasting quality and long-term customer satisfaction is paying dividends. Despite some weakness in the regional market for commercial real estate, Chamberlin Associates will break ground in May on a two story, 44,250 square foot office building at 5075 Hopyard Road, their second project in Hacienda.

They also boast a 100 percent occupancy rate for their entire portfolio, which is a tremendous validation of their business philosophy.

"We're constantly having to fight the concept that real estate is just a commodity, because a lot of product gets built these days that doesn't focus on a lot of the things that are important to us," says Graeser.

"Our tenants are people that we've developed a relationship with- they're not just a company that sends us a rent check every month," adds Batchelor. That may be the key to their business. By focusing on the long-term view, they make their properties more attractive to companies with a similar focus. It's a good foundation.