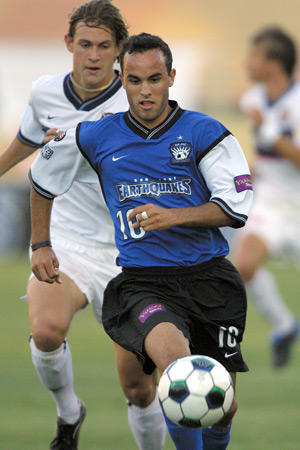 In most parts of the world, soccer is not only the biggest, most popular sport, but it's a sport nearly everyone can identify with, having played it in their youth. Here in the U.S. baseball, football, and basketball may be the sports that most fans are familiar with, but soccer seems poised to experience a huge increase in popularity. More than 17 million American fans have attended Major League Soccer matches during the league's first six seasons.

The U.S. National Team's run to the quarterfinals of this year's World Cup turned out to be the biggest sports story of the summer, with players like Landon Donovan following up their success on the field with appearances on David Letterman and other shows traditionally frequented by celebrities the caliber of movie stars. Now, Hacienda employees and residents have the opportunity to see Donovan play in person with his home team, the San Jose Earthquakes, on the team's special Hacienda Night.

According to Mark Akin, corporate ticket sales account executive for the Earthquakes, one of the biggest differences between Major League Soccer and other popular sports is fan appreciation. "The players hang around after the game to meet the fans and sign autographs," he says. "The thing that strikes you the most is what a nice bunch of guys they are."Tickets are on sale now for the September 7 game at a discount price of $11 (regularly $15). You can place your ticket order via the Internet at www.store.yahoo.com/sjcorporate/hacienda.html or obtain discounted tickets at the Earthquakes ticket office by visiting 3550 Stevens Creek Blvd (near San Tomas Expressway) in San Jose. Additional information on the offer can be obtained from Mark Akin at (408) 260-6344 or from the Hacienda Owners Association at (925) 734-6500.