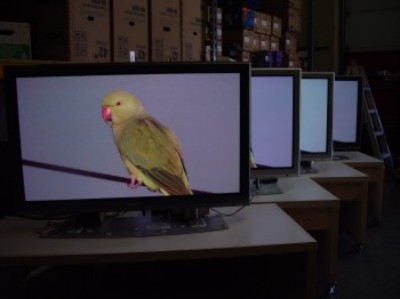 These Neoart plasma displays are undergoing quality control testing before being shipped to the company's customers.

Over the past few decades, high technology products have made their way into nearly every aspect of our lives, from the office to the living room. At work, computers continuously gain speed and capabilities and at home, the sights and sounds that entertain us are rapidly improving in quality. If it's video technology that tickles your fancy, you might want to check out the massive high-tech televisions on display in the offices of Akira Tecwell at 5627 Stoneridge Drive Suite 316 at Hacienda. The company has been in Pleasanton since 1991 and currently has eight employees working out of the Hacienda office, which it has occupied since April.

The 42-inch NEOART PDP plasma displays, which hang on your wall, accept various types of video sources, including composite video, S-VHS, and component RGB for DVD input. If you're tired of your little 17-inch computer monitor, the screens also have a PC monitor connector that accepts from VGA up to SXGA resolutions. The displays, manufactured in South Korea, are currently selling through the distributor channel at a rate of about 100 per month. Currently, Akira Tecwell serves as the sales and distribution center for the NEOART plasma screens but has future plans to assemble displays here in the U.S. from components obtained in Asia.

According to Kevin Parks, president of Akira Tecwell, the displays are going to get not only bigger in the future, but they'll also have a clearer picture. "We are going to bring in 50-inch and 60-inch screens with a higher resolution than the current model," he says. "Currently, the resolution is SVGA and we're going have XVGA and a higher contrast rate."

Looking further into the future, Parks sees the technology for computer and television displays becoming even more fascinating. Eventually, he says that display technology will be moving to Organic Light Emitting Diodes (OLEDs) where you can have displays that you roll onto the wall like wallpaper.

"That may be the final goal of the display technologies," Parks says. "You could have a ballpoint pen and take the display out of the pen."

For sales personnel who currently need to carry around laptops to do PowerPoint presentations, OLED technology could truly be a blessing, and larger versions of OLED screens could result in very big but highly portable screens for watching movies or sports at home.

Until you can unroll your TV screen or computer monitor, you'll have to be satisfied with Akira's 42-inch plasma screens. However, for most people, a flat screen that big with that type of clarity will revolutionize their viewing for years to come.For more information, contact Emily Han, sales manager, at (925) 734-6000.