Valley Choral Society Takes You on a Sentimental Journey 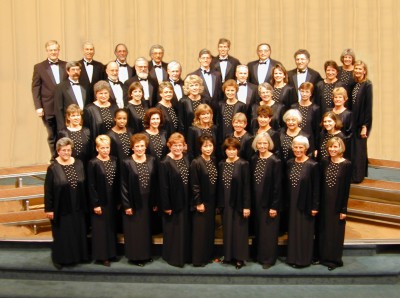 Whether you actually remember the 1940s or simply enjoy the music from that era, the Valley Choral Society's upcoming "Sentimental Journey" concert will take you back to the days of black and white movies and cocktail dresses.

The Valley Choral Society, now entering its 38th year, consists of about forty-five singers, many of whom live in the Tri-Valley area and some who have been with the Society for as long as 25 years.

The Choral Society was formed back in the early 1960s as the Livermore Civic Chorus and has been entertaining crowds continuously ever since. The chorus sings four programs during the year and holds concerts at many locations including Livermore, Pleasanton, Oakland, Walnut Creek, and San Francisco.

The upcoming "Sentimental Journey" concert will include music from the 1940s, including songs from Oklahoma, Carousel, and other musicals. This event is the Valley Choral Society's fundraising activity for the year and will include a silent auction, a live auction, and dinner. Last year's event was completely sold out.

When guests arrive, they'll be greeted by chorus members dressed for an evening out in the early 1940s passing out hors d'ouevres and glasses of wine.

Next, guests and members are given the opportunity to spend some time circulating around the silent auction items. According to Bill Leach, board president for the Valley Choral Society, the most popular fundraising events at the September concerts are the silent and live auctions.

"In the past, we've auctioned off weekends away at cabins, very nice bottles of wine, and dinners to be prepared in your home," he says.

The silent auction items typically include signed sports memorabilia and baskets donated by local merchants or assembled by Society members.

This year, the event will take place starting at 5:00 pm September 15 at the Castlewood Country Club in Pleasanton. Tickets are priced at $65 per person and can be purchased by calling Bobby Jensen at (925) 846-8813. The deadline for purchasing tickets is September 10.