For Pete Ruggeri, the Joy is in the Challenge 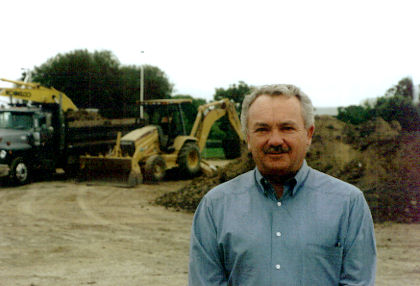 Most successful business people will tell you that the key to reaching your business and financial objectives is to set clear goals that you intend to achieve. After reaching each goal, the idea is to set another that's a little further up the ladder of achievement. This approach, however popular, is not the only road to success. Piero "Pete" Ruggeri, president and co-owner of civil engineering firm Ruggeri-Jensen-Azar & Associates, is certainly among the successful executives in Hacienda. However, his path to success seems to be based more on the Greek phrase carpe diem-seize the day-than on any sort of grand plan of achieving specific goals. "I didn't have any goals when I started off," Ruggeri says. "Basically, I was always looking for challenges and opportunities and accepting them when they presented themselves."

Ruggeri was born in Italy and moved with his family to the U.S. when he was eight years old. He remembers being interested in building things at an early age. "My father always built things himself," Ruggeri says. "When things needed to be built or repaired around the house, he took care of it rather than hiring somebody else to do the work." Helping out his father and his uncle building greenhouses gave Ruggeri a love for the feeling of accomplishment one gets from completing a project. "I was always interested in coming up with ideas and then developing my ideas into something that was built so that you could actually see it function," he says.

The desire to build things remained as Ruggeri matured and entered the workforce. Throughout high school and college he worked in construction-related fields for summer and part-time jobs. Then, in college, he majored in civil engineering and earned a bachelors degree in the subject from Santa Clara University in 1970. His first job after earning his degree was with the Alameda County Flood Control and Water Conservation District, where he worked for seven years. After that, he went to work for a firm called Bissell and Karn, the company that did the civil engineering for Hacienda Business Park. "We worked with the developer, Joe Callahan, to lay out the streets and the lots," Ruggeri says. "We also came up with a master plan for the transportation facilities, the water, sewer, storm drainage, and the power supply, and did all of the engineering for Hacienda. Basically, it consisted of building all of the roads and the utility infrastructure to service the whole park all at one time. That was kind of a unique concept in those days. Rather than building the roads and the infrastructure in phases, it was built all at once."

Ruggeri, Jensen, and Azar all worked together as civil engineers at Bissell and Karn. When Bissell and Karn was purchased in 1990 by Greiner Engineering, the three continued to work for their new employer until 1995, when Ruggeri-Jensen-Azar & Associates was founded. Ruggeri-Jensen-Azar & Associates provides civil engineering, planning and surveying services for public works and private sector clients. The company's staff has specialized expertise in hydrology/hydraulics, street and highway design, utilities planning, and land planning. The company was founded in June of 1995 and currently employs about 100 engineers, surveyors, planners, and administrative people. RJA's headquarters in Hacienda at 6601 Owens Drive is built on one of the last lots that was sold by Hacienda co-financier Prudential Insurance Company of America. "We're proud to be a part of both the history and the present of Hacienda Business Park," Ruggeri says.

The ability to learn from others is a common characteristic among successful business people and Pete Ruggeri is no exception. He cites three people who had the most influence on his career. "My father taught me the significance of hard work, honesty, common sense, and the importance of keeping your word," Ruggeri says. His first career mentor was Shingi "Mo" Momono, his first supervisor at the Alameda County Flood Control and Water Conservation District. "Mo taught me the technical skills necessary to be a good engineer and, above all, stressed the importance of doing things thoroughly and correctly the first time." Ruggeri says that his career was most inspired by Dick Karn, the former President and CEO of Bissell & Karn. "Dick is the ultimate professional engineer," Ruggeri says. "He not only epitomizes integrity associated with engineering as a profession, but also has the leadership and business knowledge necessary to make a business successful."

In his role as president of Ruggeri-Jensen-Azar & Associates, Ruggeri oversees the company's financial, administrative, and legal matters, but even as an executive, he still enjoys doing engineering work on projects. He still works directly with clients on projects-including one of the forefathers of Hacienda. "I still can't get away from Joe Callahan," he says. RJA is currently working with Callahan Property Company on the expansion of the ValleyCare Hospital in Livermore. Callahan Property Company is also based in Hacienda on Stoneridge Drive.

Ruggeri's ideas on how to achieve success in business seem to have less to do with planning than with preparing for opportunities so that he's ready to embrace them when they present themselves. "You need to have the technical knowledge to perform the work, do things honestly, and you keep your word," he says. "Then, if you associate yourself with good people and you give them the proper tools to do their job, you're going to be successful." As a supervisor, Ruggeri has the utmost confidence in the people he oversees and likes to take a hands-off approach to management, allowing them to come up with their own ideas. "I try not to dictate to them what to do," he says. "But I do make suggestions along the way."

Looking at the clients Ruggeri-Jensen-Azar & Associates serves, it's obvious that Pete Ruggeri's business approach is paying off. RJA works with most of the large builders in the area and has been involved in most of the large projects in the Tri-Valley. They also pride themselves in working with smaller clients. RJA is also still working on Hacienda Business Park-one of their recent projects was the expansion of PeopleSoft on a high profile site adjacent to interstate 580.

Enjoying his work and keeping himself challenged are motivating forces in Ruggeri's life and, at this point, he doesn't see retirement approaching any time in the near future. "As long as I'm having fun I'd like to be associated with my work," he says. "I find challenges every day. They range from trying to mentor a young person who's working for you, to coming up with a solution to a difficult engineering problem, to taking care of a fire drill on a job that's under construction. Challenges arise all the time and you never know which ones or how many of them you're going to get on any given day." For some, setting out a series of goals to achieve works as a game plan for success. Pete Ruggeri, however, is an example of taking another route. It seems that if you're prepare and educate yourself well enough, success can be attained by being smart enough to choose the correct fork in the road when it presents itself. And, if you really enjoy your work, you're probably much more successful than most people from the very start.