Nor-Ski Offers The Gear You Need to Hit the Slopes, Plus a Lot More 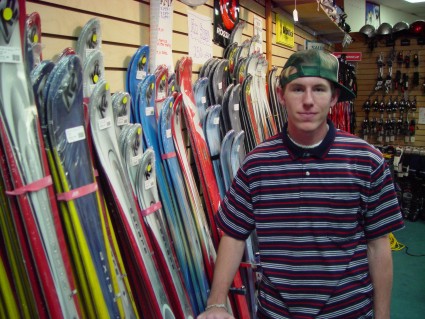 Devin Nelson, who works in Nor-Ski's Hacienda location, is on hand to help choose skis, snowboards, skateboards, and even lacrosse equipment.

When the weather begins to cool and the leaves begin to turn, many people start to think about the holidays. To others, however, the chill in the air means only one thing: ski season. If you're looking for ski equipment and clothing, snowboards, or rental skis, you might want to check out Nor-Ski. Nor-Ski, which has a store on Hopyard Road in the Gateway Square shopping center, also has stores in Lafayette, Walnut Creek, and San Ramon. In addition to selling ski gear, Nor-Ski also sells the equipment you need for lacrosse, soccer, inline skating, and skateboarding.

Nor-Ski opened up shop back in 1979 and moved into its location at Hacienda eight years ago. The company is family owned and operated by Bo, Sergio, and Christian Carvacho. "I was born on skis," says Bo Carvacho, one of the owners of Nor-Ski. "I'm from Norway, so that's where the company name came from." Skiing played a large part in Bo Carvacho's move to the U.S. in 1964. "I came to the United States when I was 19 to go to school in Colorado," she says. Bo Carvacho attended Denver University on a skiing scholarship, which is where she met her husband Sergio, co-owner of Nor-Ski. "They had all these Nordic and German and French people, which is how they won the NCAA ski championship for ten years in a row," she says. Denver University has, in fact, won the most ski championships in NCAA history and still has a number of Norwegians on the team.

The skiing experience of Bo Carvacho and her family makes them very well qualified to comment on trends in the ski industry-especially in the area of equipment. "The hot thing right now is getting people to ski on shape skis instead of skiing on straight skis," Carvacho says. "Shape skis are much wider and you can ski them shorter than the straight skis. They make it much easier to turn because you have less ski in front and in back of you."

Nor-Ski offers a 10% discount to church groups, school groups, ski clubs, and any group of 12 or more. Even if you're not renting equipment for a large group, Carvacho thinks you'll be pleasantly surprised by what you find at Nor-Ski. "We have really good rental prices and great service prices," she says. Since we're now in the midst of ski season, don't count on seeing the Carvacho family behind the rental counter at Nor-Ski. Like their customers, they understand the excitement of winter sports, so you might be more likely to see them on the slopes. If you're a ski buff, however, buying your gear from a shop owned others who share your passion might just make sense.