For Robert DeKoning, Vision and Execution are the Keys to Success - in either Business or Basketball 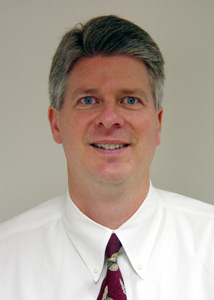 In many ways, Robert DeKoning's business career started before he even realized it, on a Christmas morning when he received a gift that's rather unusual for a young boy.

"There were other presents, too, but in my stocking was a stock certificate," he recalls. "With that came the curiosity about what it represents. My father showed me the stock page in the newspaper and how to look up the value of that stock. Fortunately, the price went up initially so then you get really excited. It really led to my interest in getting into the business world. I gravitated right into accounting, finance, and eventually management."

His early interest in the market wasn't the only experience that helped shape his future, however. DeKoning, an Oregon native, also started playing basketball at an early age.

"I was very involved with sports throughout grade school, high school, and into college, including a couple years playing college basketball," he says. He credits his sporting experience with his success, almost equally with his business degree from the University of Oregon.

"I think a lot of what I do today in management is the result of my sports background. Certainly the environment of teamwork, of working together as a high-performance team, came out of sports.

DeKoning graduated from college in 1974, at the height of a recession, and took a job as a compensation clerk in a human resources department at a major hospital to get his foot in the door. Human resources would not have been his first choice, but it proved valuable nonetheless.

"HR was a great foundation for management you get those basic principles in place," he says.

Despite a rapid rise in his eight years in the field, which saw him become director of human resources for ADP, he longed for a different role.

"I was frustrated in that I had all of the responsibilities and almost none of the authority I wasn't really being included in the core decision making in the company. I played an important role, obviously human resources makes up the biggest asset a company has but it was executives in marketing, sales, finance, and R&D that were making the real decisions."

When ADP decided to begin making microcomputers, DeKoning was given an opportunity to become a vice president of manufacturing. He succeeded wildly.

"I took it from a $300,000 budget to a $25 million operation in three years, and that was my first taste of growing and scaling organizations very rapidly," he says.

That skill has become a bit of a pattern in his career. After leaving ADP after 12 years, he became senior vice president of operations for Rentrak, a video distribution company, and in three years helped the firm go from $35 million in annual revenues to $74 million. He left Rentrak to become CEO of Decision Point Systems (now Unicrew), a company that made software and kiosks that automated pre-employment processing but had never been profitable in its eight years of existence. Under DeKoning, the rise in revenues was again impressive from $1 million to $24 million in four years.

Needless to say, that kind of track record creates demand for an executive, and that is what led him to Pixion, which makes cross-platform web conferencing software.

"Pixion is a similar situation to what I walked into at Decision Point Systems. The company's been in business six or seven years with a good technology but never really hit on it from a sales and marketing perspective. They needed to bring in new leadership to help bootstrap the company and to grow it, and that's what I've enjoyed doing over the years.

"I've done it three times before successfully, so this is a chance to do it for a fourth time."

DeKoning's years of experience have shown him that there are a few key ingredients to making a company successful. The first, he says, is vision.

"As a middle manager growing up, you always have a tendency to look at the leadership above you. I had the benefit of being in organizations where there were very good top level executives, very intelligent men with good vision, and I think that those with vision impressed me the most. People migrate to leadership that has greater vision and respect it more. I saw that firsthand at Decision Point when we were executing again a clear vision, the value of that and how the employees would coalesce in that.

"It starts with the vision of where you want to be in the marketplace and where you're going to take the company in the next 12 to 36 months."

Vision alone isn't enough, however. It must be paired with leadership and communication.

"The second phase to that in my mind is leadership, and then communicating that vision to the employees, the stakeholders, and certainly the board. Sharing that vision gets people involved and working towards that vision, and then it gets down to management, planning, and organization."

DeKoning believes that leadership comes largely from defining that vision, taking it from the realm of the theoretical to something which can be acted upon everyday, in a variety of situations.

"The CEO helps you define the core value of the company and the corporate culture, so a lot of how I've grown up and some of the philosophy developed gets imparted into the company itself," he says. "What I also hope to bring into the organization are strong core values around integrity, honesty, trust, and respect, things that are important to me as an individual and things that I would look for in my bosses.

"I think it's important and I think people respond to that."

Just like a good coach, though, he explains that even the most fanciful vision will go unfulfilled unless the basic fundamentals are in place the product or service must serve a need in the marketplace. With that in place, the picture is complete.

"Part of growing a high tech company is providing a productive environment where people get reward and recognition in what they're doing. They can see that their work isn't just in the cubicle in front of them but is part of a larger picture, that the product or service that they're working on is providing something valuable to the marketplace and that their efforts are going towards real good out there," he explains.

"I think we all want to think in terms of the work that we put in day after day after day means more than just collecting a paycheck, that we're really working towards something greater. I think that, too, is fashioned into my management style."

Not to mention his vision of himself.