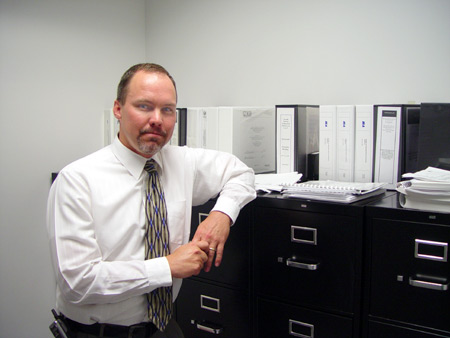 John Bird, R.G., stands with some of his firm's research materials.

It's a scenario that's a potential nightmare to any property owner. A letter arrives from a regulatory agency telling of environmental contamination that's been detected on your property only you've been in business there for just a short time and haven't ever used the chemical they've found.

That's the kind of scenario that the customers of Magellan Environmental, a new firm founded in Hacienda this year at 5976 W. Las Positas, find themselves in. It's the firm's task to prove responsibility, and therefore liability, in the case of environmental contamination.

"When we take on a new project, it's typically when there has already been environmental harm inflicted upon a property," explains John C. Bird, a Registered Geologist and Magellan's president. "We go back and reconstruct how it happened and when it happened."

Typically, Magellan's investigations begin with a small amount of information usually the materials from the first site investigation and the letter from an agency first alerting them to the problem.

The first step in an investigation is usually research.

"We'll go back and take a look at all of the historical uses of that property," Bird says. "We'll also take a look at any regulatory investigations that have been done on the property or the surrounding area, because that can lead us to some pretty big clues as to when this impact occurred and who potentially could be responsible for it. We also establish the chain of title and tenant records for the property."

Research tools include everything from real estate records to old phone directories. There's also a scientific component to each investigation.

"Establishing how and when an environmental impairment actually happened is where the real science comes in," he says. "First we have to find out what the contaminants of concern are, the distance of the migration of the chemicals, and whether there's been any degradation of that chemical through natural processes the breaking down of the components to their daughter products."

All that information helps Bird and his staff characterize the extent of the contamination on the property as well as when and how it might have occurred.

When the picture is complete their goal is to provide as much data as possible the information goes to the attorneys and expert witnesses. "We provide them the factual basis and they draw their own conclusions," he says. "With enough facts, you can usually make the correct assessment."