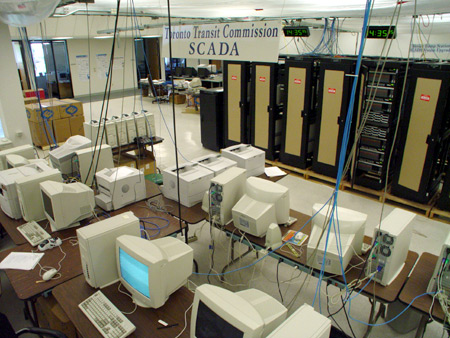 Prior to an on-site installation, Transdyn personnel test their work in their Hacienda headquarters. The set-up above is for the City of Toronto.

Transdyn Controls, a company specializing in large scale computer control systems for the transportation and utility industries, is working on a number of projects which will help increase the operational efficiency of freeways, bridges, and tunnels, as well as municipal water distribution and treatment.

Headquartered in Hacienda, Transdyn has seen a growing demand for their work, which is now being conducted worldwide.

The New York project addresses the MTA's need for an Advanced Traffic Management (ATM) system, which will serve a broad variety of functions. When installed, new computers, communication equipment, and software will aid in the monitoring of traffic, weather, and roadway conditions. The system will also provide the means to detect and respond quickly to traffic accidents and other incidents, and to communicate to drivers via electronic message signs and radio.

The net result will make it easier to manage the area's bridges and roadways and also benefit motorists, who will reap the rewards of the MTA's increased efficiency.

Transdyn is working on a number of other interesting projects, including the Cross-Israel Highway, a toll road with a difference: no toll booths. The 55-mile highway runs north-south through the length of the country.

"We are a subcontractor to Raytheon on this project they are providing the electronic toll collection system and we're providing all the traffic and facilities management computer systems," says Thomas P. McPharlin, Ph.D., Transdyn vice president of technology.

Transdyn's contributions to the project include remote-control video surveillance cameras, tools to monitor traffic and roadway conditions, variable message signs, and more. The most interesting aspect of the project, however, is the automated toll-taking function.

"It works like a normal toll road," McPharlin explains. "If you have a transponder, you can drive right through; if you don't have a transponder, the cameras take three or four pictures of your license plate and the computer will digitize those numbers, look them up in the motor vehicle database, and then send you a bill. There's no booths or toll takers it's fully automated. There are only a few (roads) in the world like that."

There may be more to come, however. Transdyn is already working with partners in China who are interested in bringing the technology to the Far East.Transdyn is also working on control systems for the Toronto, Canada trolley and subway system; two water treatment facilities in Roseville; and water distribution projects in Riverside, California and San Antonio, Texas.