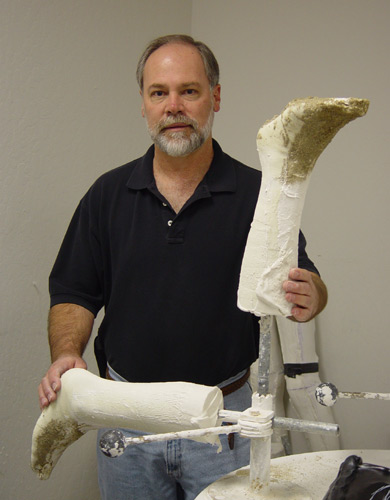 Gregory Brunt, CO, with two of the plaster molds which will be used in the process of building orthotics - devices used to support the body by preventing or aiding motion.

As businesses grow more specialized, the tools to run them have become specialized as well. Now, even large businesses can find off-the-rack solutions that meet their needs.

That's quite a contrast to the orthotics and prosthetics industry, however.

"There aren't a lot of us throughout the country, so we have to adapt tools and technology to fit our needs," explains Gregory Brunt, a Certified Orthotist who also heads the Co-op Orthotic & Prosthetic Services Group. "We have to work on very low budgets and take technology from a lot of different areas and make it work for us."

The company provides orthotic and prosthetic services, both seeing patients referred to them by medical specialists and manufacturing specialized, custom-fit devices to other orthotics suppliers.

"An orthotic device is worn on the body to help the body do something, to support it or to help or prevent motion," Brunt explains. "A prosthetic device is used to replace a body part and its function, to some extent."

Looking around their West Las Positas facility, it's easy to see the mixture of technologies that he describes. Behind the administrative area, waiting room, and patient care rooms is a warehouse area with tools for making plaster molds, machinery borrowed from custom shoemakers, a home-made vacuum chamber used in creating orthotic shoe inserts, and a Silicon Graphics workstation with professional 3D animation and design software that they've customized for their own purposes. What connects them all is their use in creating orthotic devices for virtually any part of the body hands, wrists, elbows, knees, feet, and even torsos.

"We use a lot of different technologies," he explains. "We do leather work, we do a lot of sewing, molded plastics, and a lot of plaster sculpting work."

One example of all this technology coming together is in the creation of foot orthotics devices that are placed in a patient's shoe.

The process begins with the creation of a foot impression, made when a patient steps into a small box filled with a foam that records the shape of their foot. Brunt uses a digitizer which turns the impression into a 3D wireframe on his workstation. He uses that information, as well as his knowledge of anatomy and physiology, to design a foot orthotic again, in wireframe form using the 3D software which will be sculpted out of plaster by a computer-controlled machine tool.

Once formed, the plaster mold is used to form the rough orthotic from a dense foam rubber material. The orthotic is then finished with a craftsman's eye and care using the custom shoe-making equipment.

It's a complicated process that requires substantial expertise.

"We couldn't just put plastic on (a cast of someone's foot or leg) and say, 'OK, here's your finished device.' There are a lot of changes that have to be made, a lot of hand finishing. A lot of people don't appreciate the amount of work that goes into it. What we do is as much an art form as a science."