Ken Baugh has Taken his Father's Business A Step Further, After his Own Style 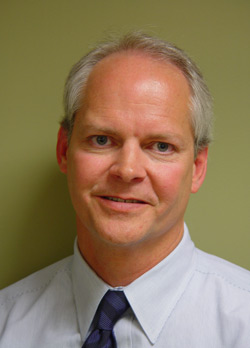 Taking over a family business sounds like an easy career decision. On the surface, it looks like a quick path to the top. In reality, it can have its own hazards family traditions can mix with business practices to a degree that innovation and executive leadership is impossible.

That's a trap that Ken Baugh, whose father founded the firm he heads today, has managed to avoid. He had some help, though.

"My dad was not someone who strongly encouraged me to get into the business, but he always considered it an opportunity," he says. "He thought it would be best if I got out and gained experience in other companies before deciding whether I wanted to be involved in the business."

Baugh grew up in Los Altos and worked for his father's business, Space Designs, as his summer job through high school and college.

"My dad had been in the furniture business for as long as I can remember. He started out in the educational market, providing furnishings for schools and institutions and so forth. Shortly after that, they branched out into the health care market and became affiliated with Herman Miller, which is our primary supplier right now. The company migrated more into the general contract office market in the early 80's and that's really when the business took off."

Baugh explains that a lot of his first jobs were in his father's company.

"I would go out and put together desks and chairs and when I got old enough to drive a truck, I was driving a truck. I really cut my teeth on the operations side of the business: installation, warehousing, and so forth."

He went on to study business, first getting an undergraduate degree at Brigham Young University and then an MBA from USC. His first job out of college was as a financial analyst for a start-up company in San Diego.

"It was prior to venture capital but it was funded by a closely-held group of partners and it was a pretty interesting time in terms of seeing how a business gets off the ground on a shoestring budget," he recalls.

After a couple years there, his next step was a return to the Bay Area, where he worked in real estate development.

"I was working on the investment side of a development company, working with limited partnerships and putting together deals. We were dealing with both commercial and residential properties, a lot of office buildings and apartments. I'd always had an interest in commercial real estate and it was an opportunity to further explore that."

His plans in that direction were derailed in the mid-80's when real estate development slowed. He returned to Space Designs in 1988 but values his experience in other industries.

"It was important for me to just get out there and further develop my skills and my style, along with some excellent training with different companies," he explains. "When I came back into the company, I had a track record I had some success under my belt and I wasn't just coming in fresh out of school and carrying on in some of the ways that we had done things forever.

"With the experience that I'd gained, I had the opportunity to bring in a broader perspective. I think that's served both me and the company well."

He gained more than just perspective, however.

"I was able to develop a lot of skills managerial skills, financial skills, technology skills, people skills All of those things came into play."

He returned to Space Designs as the chief financial officer and remained in that position for about eight years.

During his tenure as CFO, he took a leading role in adopting an Employee Stock Ownership Plan, or ESOP, for the company's employees.

"My father and his partner used to say that, had the companies that they were with prior to starting Space Designs provided them with equity opportunities, they never would have left," he says. "From the founders of the company on down, it's been our philosophy to attract and retain great people, and the way you do that is to give them a stake in the outcome, a vested interest in the business."

Becoming an employee-owned company has meant a great number of changes, all of which Baugh recognizes as positive.

"I believe very strongly in the philosophy of open-book management, and basically what that means is giving people all of the information they need to make good decisions, including the financial information," he explains.

The idea is simple: Most business decisions are easy to make if employees know enough about the situation to recognize what's in the company's best interest.

"It really starts with training them in financial literacy, and we've gone through the process of training all of our employees, every single one of them, on how to read financial statements and understand the numbers. We've created an atmosphere here where our employees are engaged in the business and understand the reality of the business, and they in turn have come up with a lot of great ideas to save costs and to do things more efficiently."

Baugh says that the novel structure allows everyone's jobs to be more fulfilling as well.

"I think it makes everybody's job a lot more fun because every day, every week, they know where we're at, they know where we need to improve if we're slipping in any areas, and there's a much greater sense of accountability all the way around.

"I really wouldn't want to run a business any other way after going through this and experiencing it, because it's so much more meaningful for everyone involved."

Baugh took the reins as president in 1996, and quickly began making even more changes. Space Designs merged with Coordinated Resources of San Jose (CRI), another Herman Miller dealer, and Pivot Interiors was born. He went from having one partner to having three but describes the arrangement between the four principals as "a marriage made in heaven."

"Two of us are heavily involved in leading the sales organization, one of us leads our services organization, and I've got responsibility for corporate finance, human resources, and IT, as well as the overall corporate administration."

Baugh has created many changes in the business since he first returned, but he's constantly on the lookout for new opportunities for improvement.